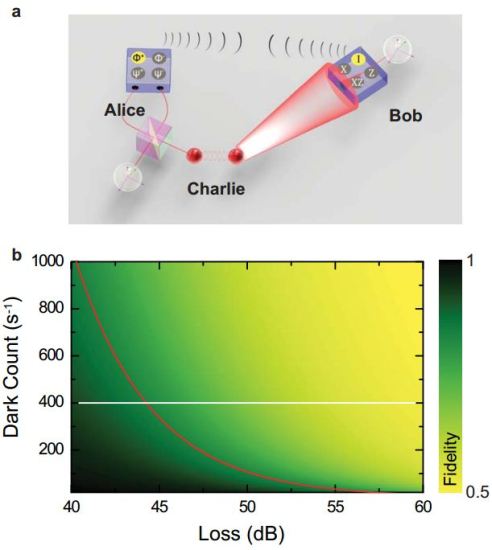 Experimental scheme and calculated fidelity for practical free-space quantum teleportation.
(a) Schematic drawing for practical free-space quantum teleportation. Charlie distributes an entangled pair of photons 2 and 3 to Alice and Bob, where Bob is at a distant location. Due to the finite size of the telescopes Bob and Charlie can use and the diffraction limit, Bob will receive the signal photon with very high loss. Alice then performs a joint Bell-state measurement (BSM) on the initial particle and one of the entangled photons from Charlie, projecting them onto an entangled state. After she has sent the result of her measurement as classical information to Bob, he can perform a unitary transformation (U) on his photon to obtain the initial state.
(b) Calculated fidelity for ideal optics and an entangled photon source with the generation probability used in Ref. [24] as a function of total channel loss and the dark count on Bob’s side. The red line shows the classical limit [25] of 2/3. The white line shows the lowest dark count rate currently achieved via free-space link [21]. 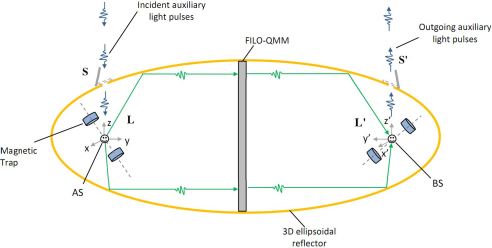 This paper describes a scheme, through which the quantum information as well as the structural information of a time-reversal invariant system can be teleported over a distance. I show that my teleportation scheme can be viewed as a form of reversible purification process by repeated interactions with an auxiliary quantum system….