A hybrid global-quantum-communications network, in which a satellite constellation distributes entangled photon pairs (red wave packets; entanglement depicted by wavy lines) to distant ground stations (observatories) that host multimode quantum memories for storage. These stations act as hubs that connect to local nodes (black dots) via fiber-optic or atmospheric links. Using these nearest-neighbor entangled links, via entanglement swapping, two distant nodes can share entanglement. Note that this architecture can support inter-satellite entanglement links as well, which is useful for exploring fundamental physics , and for forming an international time standard

Sumeet Khatri, Anthony J. Brady, Renée A. Desporte, Manon P. Bart, Jonathan P. Dowling
Recent experimental breakthroughs in satellite quantum communications have opened up the possibility of creating a global quantum internet using satellite links. This approach appears to be particularly viable in the near term, due to the lower attenuation of optical signals from satellite to ground, and due to the currently short coherence times of quantum memories. These drawbacks prevent ground-based entanglement distribution using atmospheric or optical-fiber links at high rates over long distances. In this work, we propose a global-scale quantum internet consisting of a constellation of orbiting satellites that provides a continuous on-demand entanglement distribution service to ground stations. The satellites can also function as untrusted nodes for the purpose of long-distance quantum-key distribution. We determine the optimal resource cost of such a network for obtaining continuous global coverage. We also analyze the performance of the network in terms of achievable entanglement-distribution rates and compare these rates to those that can be obtained using ground-based quantum-repeater networks.

Read also “Why the quantum internet should be built in space“

The last decade has seen quantum computing grow from a niche research endeavour to a large-scale business operation. While it’s exciting that the field is experiencing a surge of private funding and media publicity, it’s worth remembering that nobody yet knows how to build a useful fault-tolerant quantum computer. The path ahead is not “just engineering”, and in the coming decade we have to pay attention to all the “alternative approaches”, “crazy ideas” and “new ways of doing things”.

With this in mind, I created this subjective list of quantum computing research highlights of 2019. It highlights experimental achievements which show new exciting ways of controlling qubits. In such a vast space of literature, I have no doubt I missed some essential works, so I encourage you to get in touch and add your favourites to the list ….

Franz G. Fuchs, Vemund Falch, Christian Johnsen
Quantum computers are on the verge of becoming a commercially available reality. They represent a paradigm change to the classical computing paradigm, and the learning curve is considerably long. The creation of games is a way to ease the transition for novices. We present a game similar to the poker variant Texas hold ’em with the intention to serve as an engaging pedagogical tool to learn the basics rules of quantum computing. The difference to the classical variant is that the community cards are replaced by a quantum register that is “randomly” initialized, and the cards for each player are replaced by quantum gates, randomly drawn from a set of available gates. Each player can create a quantum circuit with their cards, with the aim to maximize the number of 1’s that are measured in the computational basis. The basic concepts of superposition, entanglement and quantum gates are employed. We provide a proof-of-concept implementation using Qiskit. A comparison of the results using a simulator and IBM machines is conducted, showing that error rates on contemporary quantum computers are still very high. Improvements on the error rates and error mitigation techniques are necessary, even for simple circuits, for the success of noisy intermediate scale quantum computers. 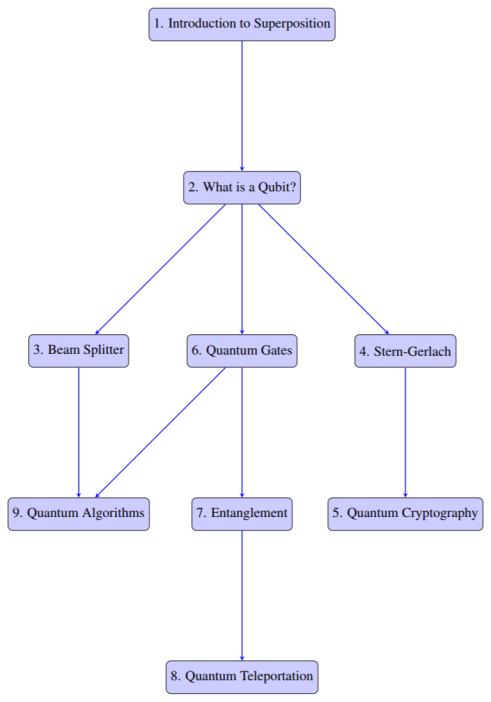 Anastasia Perry, Ranbel Sun, Ciaran Hughes, Joshua Isaacson, Jessica Turner
Quantum computing is a growing field at the intersection of physics and computer science. This module introduces three of the key principles that govern how quantum computers work: superposition, quantum measurement, and entanglement. The goal of this module is to bridge the gap between popular science articles and advanced undergraduate texts by making some of the more technical aspects accessible to motivated high school students. Problem sets and simulation based labs of various levels are included to reinforce the conceptual ideas described in the text. This is intended as a one week course for high school students between the ages of 15-18 years. The course begins by introducing basic concepts in quantum mechanics which are needed to understand quantum computing.
Read more at https://arxiv.org/pdf/1905.00282.pdf

John Preskill, CalTech
The quantum laws governing atoms and other tiny objects seem to defy common sense, and information encoded in quantum systems has weird properties that baffle our feeble human minds. John Preskill will explain why he loves quantum entanglement, the elusive feature making quantum information fundamentally different from information in the macroscopic world. By exploiting quantum entanglement, quantum computers should be able to solve otherwise intractable problems, with far-reaching applications to cryptology, materials, and fundamental physical science. Preskill is less weird than a quantum computer, and easier to understand.

Nikesh S. Dattani, Nathaniel Bryans
The largest number factored on a quantum device reported until now was 143.
That quantum computation, which used only 4 qubits, actually also factored much larger numbers such as 3599, 13081, and 44929, without the awareness of the authors of that work.
Furthermore, unlike the implementations of Shor’s algorithm performed thus far, these 4-qubit factorizations do not need to use prior knowledge of the answer. However, because they only use 4 qubits, these factorizations can also be performed trivially on classical computers. We discover a class of numbers for which the power of quantum information actually comes into play.
We then demonstrate a 3-qubit factorization of 175, which would be the first quantum factorization of a triprime.
Read more at http://arxiv.org/pdf/1411.6758v2.pdf

Li Zhaokai, Liu Xiaomei, Xu Nanyang, Du jiangfeng
Machines are possible to have some artificial intelligence like human beings owing to particular algorithms or software.
Such machines could learn knowledge from what people taught them and do works according to the knowledge.
In practical learning cases, the data is often extremely complicated and large, thus classical learning machines often need huge computational resources. Quantum machine learning algorithm, on the other hand, could be exponentially faster than classical machines using quantum parallelism.
Here, we demonstrate a quantum machine learning algorithm on a four-qubit NMR test bench to solve an optical character recognition problem, also known as the handwriting recognition.
The quantum machine learns standard character fonts and then recognize handwritten characters from a set with two candidates.
To our best knowledge, this is the first artificial intelligence realized on a quantum processor.
Due to the widespreading importance of artificial intelligence and its tremendous consuming of computational resources, quantum speedup would be extremely attractive against the challenges from the Big Data…..
Read more at http://arxiv.org/pdf/1410.1054v1.pdf 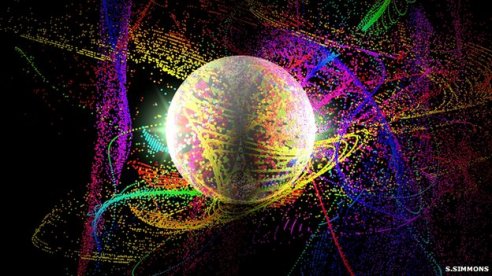 Quantum systems are notoriously fickle to measure and manipulate

A fragile quantum memory state has been held stable at room temperature for a “world record” 39 minutes – overcoming a key barrier to ultrafast computers.

“Qubits” of information encoded in a silicon system persisted for almost 100 times longer than ever before.

Quantum systems are notoriously fickle to measure and manipulate, but if harnessed could transform computing.

The new benchmark was set by an international team led by Mike Thewalt of Simon Fraser University, Canada.

“This opens the possibility of truly long-term storage of quantum information at room temperature,” said Prof Thewalt, whose achievement is detailed in the journal Science.

In conventional computers, “bits” of data are stored as a string of 1s and 0s.

But in a quantum system, “qubits” are stored in a so-called “superposition state” in which they can be both 1s and 0 at the same time – enabling them to perform multiple calculations simultaneously.

The trouble with qubits is their instability – typical devices “forget” their memories in less than a second.

There is no Guinness Book of quantum records. But unofficially, the previous best for a solid state system was 25 seconds at room temperature, or three minutes under cryogenic conditions.

In this new experiment, scientists encoded information into the nuclei of phosphorus atoms held in a sliver of purified silicon.

Magnetic field pulses were used to tilt the spin of the nuclei and create superposition states – the qubits of memory.

The team prepared the sample at -269C, close to absolute zero – the lowest temperature possible…..