Illustration of the FASER experiment. The new FASERν detector, which is just 25 cm wide, 25 cm tall and 1.35 m long, will be located at the front of FASER’s main detector in a narrow trench (yellow block in the bottom right of the image). (Image: FASER/CERN)

No neutrino produced at a particle collider has ever been detected, even though colliders create them in huge numbers. This could now change with the approval of a new detector for the FASER experiment at CERN. The small and inexpensive detector, called FASERν, will be placed at the front of the FASER experiment’s main detector, and could launch a new era in neutrino physics at particle colliders.

Ever since they were first observed at a nuclear reactor in 1956, neutrinos have been detected from many sources, such as the sun, cosmic-ray interactions in the atmosphere, and the Earth, yet never at a particle collider. That’s unfortunate, because most collider neutrinos are produced at very high energies, at which neutrino interactions have not been well studied. Neutrinos produced at colliders could therefore shed new light on neutrinos, which remain the most enigmatic of the fundamental particles that make up matter.

The main reasons why collider neutrinos haven’t been detected are that, firstly, neutrinos interact very weakly with other matter and, secondly, collider detectors miss them. The highest-energy collider neutrinos, which are more likely to interact with the detector material, are mostly produced along the beamline – the line travelled by particle beams in a collider. However, typical collider detectors have holes along the beamline to let the beams through, so they can’t detect these neutrinos.

Enter FASER, which was approved earlier this year to search for light and weakly interacting particles such as dark photons – hypothetical particles that could mediate an unknown force that would link visible matter with dark matter. FASER, supported by the Heising-Simons and Simons Foundations, will be located along the beamline of the Large Hadron Collider (LHC), about 480 metres downstream of the ATLAS experiment, so it will be ideally positioned to detect neutrinos. However, the detection can’t be done with the experiment’s main detector.

“Since neutrinos interact very weakly with matter, you need a target with a lot of material in it to successfully detect them. The main FASER detector doesn’t have such a target, and is therefore unable to detect neutrinos, despite the huge number that will traverse the detector from the LHC collisions,” explains Jamie Boyd, co-spokesperson for the FASER experiment. “This is where FASERν comes in. It is made up of emulsion films and tungsten plates, and acts both as the target and the detector to see the neutrino interactions.”

FASERν is only 25 cm wide, 25 cm tall and 1.35 m long, but weighs 1.2 tonnes. Current neutrino detectors are generally much bigger, for example Super-Kamiokande, an underground neutrino detector in Japan, weighs 50 000 tonnes, and the IceCube detector in the South Pole has a volume of a cubic kilometre.

“These neutrinos will have the highest energies yet of man-made neutrinos, and their detection and study at the LHC will be a milestone in particle physics, allowing researchers to make highly complementary measurements in neutrino physics,” says Boyd. “What’s more, FASERν may also pave the way for neutrino programmes at future colliders, and the results of these programmes could feed into discussions of proposals for much larger neutrino detectors.”

The FASERν detector will be installed before the next LHC run, which will start in 2021, and it will collect data throughout this run. 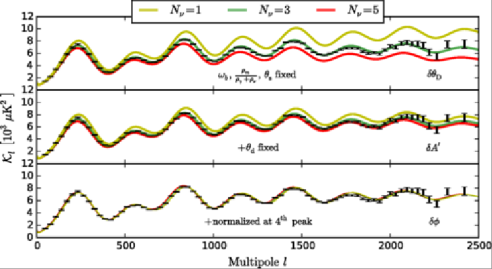 (…) Last year, a paper by Brent Follin, Lloyd Knox, Marius Millea and Zhen Pan came out, detecting this phase shift for the first time. From the publicly-available Planck (2013) data, they were able to not only definitively detect it, they were able to use that data to confirm that there are three types of neutrinos — the electron, muon and tau species — in the Universe: no more, no less.

What’s incredible about this is that there is a phase shift seen, and that when the Planck polarization spectra came out and become publicly available, they not only constrained the phase shift even further, but — as announced by Planck scientists in the aftermath of this year’s AAS meeting — they finally allowed us to determine what the temperature is of this Cosmic Neutrino Background today! (Or what it would be, if neutrinos were massless.) The result? 1.96 K, with an uncertainty of less than ±0.02 K. This neutrino background is definitely there; the fluctuation data tells us this must be so. It definitely has the effects we know it must have; this phase shift is a brand new find, detected for the very first time in 2015. Combined with everything else we know, we have enough to state that yes, there are three relic neutrino species left over from the Big Bang, with the kinetic energy that’s exactly in line with what the Big Bang predicts.(…)

Casting a net for neutrinos

Like ordinary telescopes, KM3NeT operates in darkness—but there the resemblance ends. The Km3 Neutrino Telescope (where km3 means a cubic kilometer) is a suite of detectors that sits at the pitch-black bottom of the Mediterranean Sea, 3.5 kilometers below the waves and strong currents of the surface.

KM3NeT needs this absolute night to see the faint amount of light from ghostly neutrinos striking water molecules. Neutrinos pass through most material as though it weren’t there, which is why detectors need to be so big to spot them—more volume means more chances to see a neutrino interact. When completed, KM3NeT will be the largest neutrino detector in the world, made of about 1.3 trillion gallons of seawater. END_OF_DOCUMENT_TOKEN_TO_BE_REPLACED

Majorana neutrinos are a proposed cousin of the familiar neutrinos of the Standard Model. The masses of the two particles are tied together, so if one is high, the other is low. This connection is called the seesaw mechanism.

With the discovery of the Higgs field, scientists think they have a pretty good handle on the origins of the mass of fundamental particles. Particles that interact with the field have mass, and those that don’t, don’t. However, the neutrino poses an additional mystery. Neutrinos have a very tiny mass, but not zero. Just why this should be is not known. END_OF_DOCUMENT_TOKEN_TO_BE_REPLACED

The highest energy neutrinos ever recorded have a flavor distribution of neutrinos that is consistent with the particles having a cosmic origin.

The IceCube Neutrino Observatory at the South Pole is a large array of photodetectors buried in ice. In 2013, the instrument reported signals from the highest energy neutrinos ever observed. Now, two teams of researchers have independently estimated the type, or flavor, of these neutrinos. As opposed to an earlier analysis, these new results are consistent with the neutrinos coming from cosmically large distances. Further work may begin to probe the physics going on at the neutrino sources. END_OF_DOCUMENT_TOKEN_TO_BE_REPLACED

Brian C. Lacki
What is the meaning of the Fermi Paradox — are we alone or is starfaring rare? Can general relativity be united with quantum mechanics? The searches for answers to these questions could intersect. It is known that an accelerator capable of energizing particles to the Planck scale requires cosmic proportions. The energy required to run a Planck accelerator is also cosmic, of order 100 M_sun c^2 for a hadron collider, because the natural cross section for Planck physics is so tiny. If aliens are interested in fundamental physics, they could resort to cosmic engineering for their experiments. These colliders are detectable through the vast amount of “pollution” they produce, motivating a YeV SETI program. I investigate what kinds of radiation they would emit in a fireball scenario, and the feasibility of detecting YeV radiation at Earth, particularly YeV neutrinos. Although current limits on YeV neutrinos are weak, Kardashev 3 YeV neutrino sources appear to be at least 30–100 Mpc apart on average, if they are long-lived and emit isotropically. I consider the feasibility of much larger YeV neutrino detectors, including an acoustic detection experiment that spans all of Earth’s oceans, and instrumenting the entire Kuiper Belt. Any detection of YeV neutrinos implies an extraordinary phenomenon at work, whether artificial and natural. Searches for YeV neutrinos from any source are naturally commensal, so a YeV neutrino SETI program has value beyond SETI itself, particularly in limiting topological defects. I note that the Universe is very faint in all kinds of nonthermal radiation, indicating that cosmic engineering is extremely rare.
Read more at http://arxiv.org/pdf/1503.01509v1.pdf

A COSMIC coincidence could be the first clue to the origin of a high-energy neutrino spotted in Antarctica – and may help pinpoint the source of high-energy cosmic rays that bombard Earth’s atmosphere.

Cosmic rays are massive charged particles that barrel through deep space with energies that dwarf those achieved at particle accelerators on Earth. Some may be accelerated to such high speeds by supernovas, but others have mysterious roots.

“The origin of cosmic rays is one of the most intriguing questions in astrophysics,” says Toshihiro Fujii at the University of Chicago. But because they can be deflected by magnetic fields, their sources are difficult to trace. END_OF_DOCUMENT_TOKEN_TO_BE_REPLACED 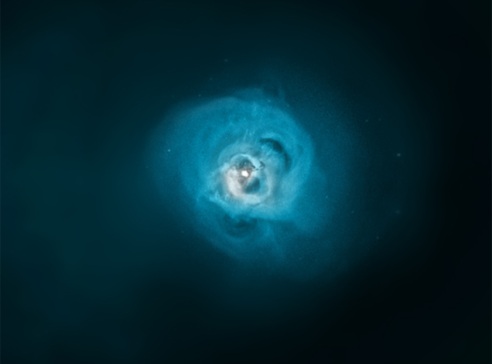 Something shadowy has reached out across the void from deep within the swirling Perseus galaxy cluster. X-ray observations of the cluster, shown here in false colour, have revealed a signal from an unidentified source.

Astronomers using the European Space Agency’s XMM-Newton space telescope and NASA’s Chandra telescope found similar signals in more than 70 galaxy clusters. It is possible that these X-rays are being produced by the decay of mysterious sterile neutrinos, as yet undiscovered particles that are predicted to barely interact with ordinary matter.

This lack of interaction makes sterile neutrinos a prime candidate to explain dark matter, the invisible stuff thought to make up most of the matter in the universe. The X-rays have an energy of around 3.5 kiloelectronvolts (keV), which could be produced by the decay of sterile neutrinos that weigh in at 7 keV, close to the mass predicted by dark matter models.
Read more at www.newscientist.com