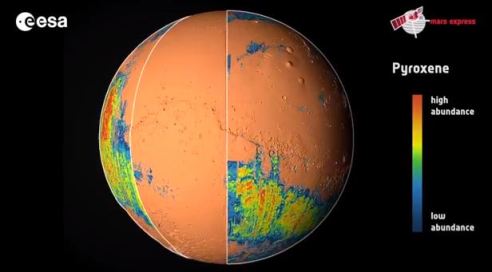 This unique atlas comprises a series of maps showing the distribution and abundance of minerals formed in water, by volcanic activity, and by weathering to create the dust that makes Mars red.
Together the maps provide a global context for the dominant geological processes that have defined the planet’s history.

The maps were built from ten years of data collected by the OMEGA visible and infrared mineralogical mapping spectrometer on Mars Express.

The animation cycles through maps showing: individual sites where a range of minerals that can only be formed in the presence of water were detected; maps of olivine and pyroxene, minerals that tell the story of volcanism and the evolution of the planet’s interior; and ferric oxide and dust. Ferric oxide is a mineral phase of iron, and is present everywhere on the planet: within the bulk crust, lava outflows and the dust oxidised by chemical reactions with the martian atmosphere, causing the surface to ‘rust’ slowly over billions of years, giving Mars its distinctive red hue.

The map showing hydrated minerals includes detections made by both ESA’s Mars Express and by NASA’s Mars Reconnaissance Orbiter.

Earlier this month, ESA’s Mars Express performed a special manoeuvre to observe an unusual alignment of Jupiter and the martian moon Phobos. The impressive images have now been processed into a movie of this rare event.
At the moment when Mars Express, Phobos, and Jupiter aligned on 1 June 2011, there was a distance of 11 389 km between the spacecraft and Phobos, and a further 529 million km to Jupiter.
The High Resolution Stereo Camera on Mars Express was kept fixed on Jupiter for the conjunction, ensuring that the planet remained static in the frame. The operation returned a total of 104 images over a period of 68 seconds, all of them taken using the camera’s super-resolution channel……
Read more: http://www.esa.int/esaSC/SEMHGWD1XOG_index_0.html