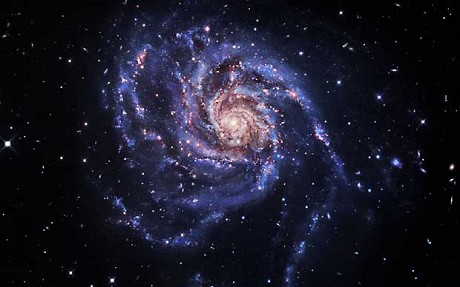 By Martin Rees
We humans haven’t changed much since our remote ancestors roamed the African savannah. Our brains evolved to cope with the human-scale environment. So it is surely remarkable that we can make sense of phenomena that confound everyday intuition: in particular, the minuscule atoms we’re made of, and the vast cosmos that surrounds us.
Thanks to powerful telescopes, and to instruments such as the Large Hadron Collider in Geneva, we can map billions of galaxies, and trace cosmic history back to some mysterious “beginning” nearly 14 billion years ago. But as always in science, each advance brings into focus some new questions that couldn’t previously have even been posed.
In a new three-part series for the Discovery Channel, Stephen Hawking’s Grand Design, my old friend and colleague explores some of the biggest issues in science today – in particular, how close we are to arriving at a “theory of everything” that explains the final mysteries of the universe. But the mystery is even deeper. For, as I argued at a Royal Society debate last week, there’s an equally fascinating question: namely whether we, as humans, will ever be able to understand our cosmos and the complexities within it.
We’ve known for a long time that, when confronting the overwhelming mystery of what banged in the Big Bang and why it banged, Einstein’s theory isn’t enough. That’s because it treats space and time as smooth and continuous. We know, however, that no material can be chopped into arbitrarily small pieces: eventually, you get down to discrete atoms. Likewise, space itself has a grainy and “quantised” structure – but on a scale a trillion trillion times smaller.
During the very earliest instants after the Big Bang, everything was so immensely squeezed that this “graininess” is crucial. But theorists are still baffled about the bedrock nature of space and time on the very smallest scale: in the fashion of ancient cartographers, we must still write: “Here be dragons.

Lord Rees is the Astronomer Royal. ‘Stephen Hawking’s Grand Design’ starts on Thursday at 9pm on the Discovery Channel with ‘The Key To The Cosmos’
Read more: www.telegraph.co.uk