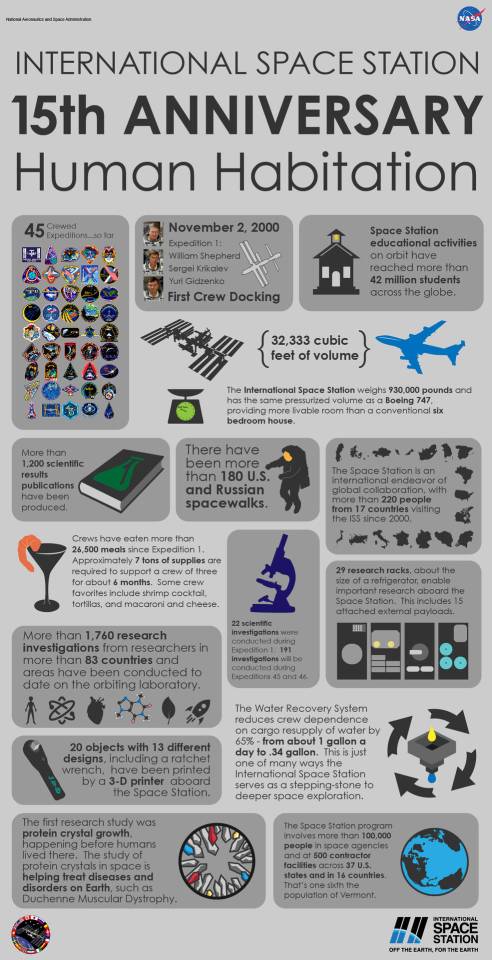 Astronauts on the International Space Station are ready to sample their harvest of a crop of “Outredgeous” red romaine lettuce from the Veggie plant growth system that tests hardware for growing vegetables and other plants in space.
Credits: NASA

Fresh food grown in the microgravity environment of space officially is on the menu for the first time for NASA astronauts on the International Space Station. Expedition 44 crew members, including NASA’s one-year astronaut Scott Kelly, are ready to sample the fruits of their labor after harvesting a crop of “Outredgeous” red romaine lettuce Monday, Aug. 10, from the Veggie plant growth system on the nation’s orbiting laboratory.

The astronauts will clean the leafy greens with citric acid-based, food safe sanitizing wipes before consuming them. They will eat half of the space bounty, setting aside the other half to be packaged and frozen on the station until it can be returned to Earth for scientific analysis.

NASA’s plant experiment, called Veg-01, is being used to study the in-orbit function and performance of the plant growth facility and its rooting “pillows,” which contain the seeds. END_OF_DOCUMENT_TOKEN_TO_BE_REPLACED

This timelapse video shows two passes over Europe taken by ESA astronaut Alexander Gerst as he flew overhead on the International Space Station at around 400 km altitude.

The International Space Station travels at 28 800 km/h meaning that it only takes 90 minutes to circle Earth completely. Each orbit the Station moves around 2200 km to the West in relation to 90 minutes before.

Astronauts often use normal consumer digital cameras to take pictures of Earth through Europe’s observatory module Cupola in their spare time. Setting the camera to take an image every few seconds and then playing the images back quickly create this timelapse effect.

Alexander worked as a geophysicist and volcanologist before he was chosen as an ESA astronaut in 2009. His Blue Dot mission includes an extensive scientific programme of experiments in physical science, biology, and human physiology as well as radiation research and technology demonstrations. All experiments chosen make use of the out-of-this-world laboratory to improve life on Earth or prepare for further human exploration of our Solar System.

Excitement still surrounds a possible hint of dark matter in an unexpected excess of cosmic-ray antielectrons (positrons) relative to electrons. A new set of data from the Alpha Magnetic Spectrometer (AMS) aboard the International Space Station confirms the positron excess and provides the most accurate measurement to date of the shape of both the electron and positron spectra. The analysis reveals that the positron flux is significantly different from the electron flux above 30 GeV in energy, which suggests that positrons and electrons have a different origin.

Cosmic rays are predominantly protons and other nuclei, but electrons and positrons make up part of the mix. Standard astrophysical models of interstellar particle collisions predict that, in cosmic rays, the fraction of positrons relative to electrons should decrease with energy. However, recent observations from satellites (e.g., PAMELA and Fermi) and from AMS have shown that the positron fraction actually increases with energy.

The AMS experiment, which has a large permanent magnet that allows particle discrimination, has been collecting data since May 2011. Out of 41 billion detection events, the AMS collaboration has identified 580,000 positrons and 9.2 million electrons (50% more than in their previous data release, see 3 April 2013 Viewpoint). Thanks to the additional data, they were able to extend their measurements of the positron flux up to 500 GeV and, similarly, of the electron flux up to 700 GeV. The high-precision data reveal that both spectra change their slope at around 30 GeV but behave differently towards higher energies: the positron flux drops off much more slowly than the electron flux. One possible explanation for this spectral difference is that the positrons are being created in annihilations of dark matter particles. The authors say data at higher energy will be needed to confirm a dark matter origin.

One of the Expedition 35 crew members aboard the Earth-orbiting International Space Station exposed this 400 millimeter night image of the greater New York City metropolitan area on March 23, 2103.

For orientation purposes, note that Manhattan runs horizontal through the frame from left to the midpoint. Central Park is just a little to the left of frame center. 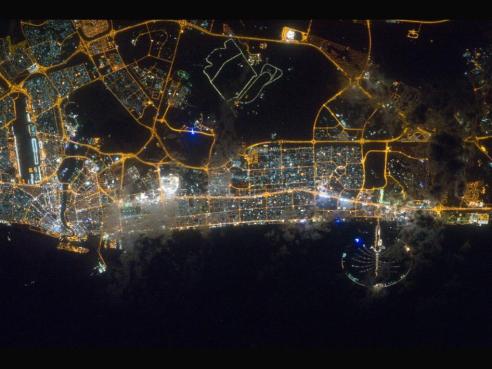 City lights of Dubai, United Arab Emirates, are featured in this image taken by the Expedition 30 crew aboard the International Space Station.
The City of Dubai–the largest metropolitan area within the emirate of Dubai–is a favorite subject of astronaut photography largely due to the unique artificial archipelagos situated directly offshore in the Persian Gulf, which were built such that their full design is only visible from the vantage point of an airplane — or an orbiting spacecraft.
The city presents an eye-catching appearance at night that vividly displays the urban development pattern.
In this detailed image, taken with a long focal length lens and digital camera optimized for fast response and high light sensitivity, several interesting patterns can be observed. The highways and major streets are sharply defined by yellow-orange lighting, while the commercial and residential areas are resolved into a speckle pattern of individual white, blue and yellow-orange lights.
Several large and brilliantly lit areas are large hotel and mall complexes, including the Burj Khalifa Tower, the world’s tallest building at 2,717 feet, or 828 meters.
The brilliant lighting of the city contrasts sharply with both the dark Persian Gulf to the northwest, and largely undeveloped and unlit areas to the southeast.
Likewise, the clusters of lighting in the Palm Jumeira complex at bottom right correspond to the relatively small part of the archipelago that has been developed. Isolated areas of blurred city lights are due to patchy clouds.