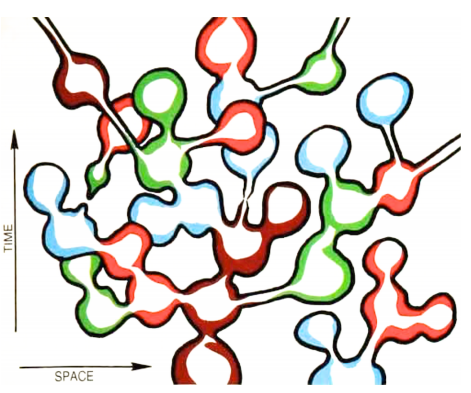 Andrei Linde
The theory of the inflationary multiverse changes the way we think about our place in the world.
According to its most popular version, our world may consist of infinitely many exponentially large parts, exhibiting different sets of low-energy laws of physics. Since these parts are extremely large, the interior of each of them behaves as if it were a separate universe, practically unaffected by the rest of the world.
This picture, combined with the theory of eternal inflation and anthropic considerations, may help to solve many difficult problems of modern physics, including the cosmological constant problem.
In this article I will briefly describe this theory and provide links to the some hard to find papers written during the first few years of the development of the inflationary multiverse scenario….
Read more at http://arxiv.org/pdf/1512.01203v1.pdf

Abstract
I give a general review of inflationary cosmology and of its present status, in view of the 2013 data release by the Planck satellite.
A specific emphasis is given to the new broad class of theories, the cosmological attractors, which have nearly model-independent predictions converging at the sweet spot of the Planck data in the (ns, r) plane.
I also discuss the problem of initial conditions for the theories favored by the Planck data.

(….)
Conclusions
Three decades ago, in inflationary theory looked like an exotic product of vivid scientific imagination.
Some of us believed that it possesses such a great explanatory potential that it must be correct; some others thought that it is too good to be true.
Not many expected that it is possible to verify any of its predictions in our lifetime.
Thanks to the enthusiastic work of many scientists, in inflationary theory is gradually becoming a broadly accepted cosmological paradigm, with many of its predictions being confirmed by observational data.
The new data release by Planck 2013 stimulating the development of new cosmological
theories, by changing the goal from finding various complicated models capable of describing
large local non-Gaussiantiy to the development of new elegant models of inflation capable of
explaining increasingly precise data in the (ns, r) plane.
Just few months ago, we did not know many good inflationary models which would naturally predict the data favored by Planck 2013.
Now the situation has changed. The existence of the universal attractor regime for a large set
of different inflationary models does not guarantee that we are on the right track, but it is
hard to ignore that all of these cosmological attractors point in the same direction, and their
predictions converge at the “sweet spot” in the (ns, r) plane preferred by WMAP9 and Planck 2013 (…)
… Read more at http://arxiv.org/pdf/1402.0526v1.pdf