Source SPACE.com: All about our solar system, outer space and exploration.

They say life is stranger than fiction. But, in fact, it is astonishing how often life is almost exactly the same as fiction. Whether it is a matter of books influencing inventors, simple coincidence, or some authors having supernatural abilities to foresee the future; the number of books that have managed to paint hauntingly accurate pictures of technologies that didn’t arrive until decades after their publication is uncanny. So while statisticians feel comfortable claiming that if you have enough monkeys tapping away at typewriters for enough years, one will eventually write Hamlet, it is nonetheless astounding that writers like H.G. Wells and Jules Verne were able to spell out so many ‘fictions’ that eventually became realities. END_OF_DOCUMENT_TOKEN_TO_BE_REPLACED

How Advanced Alien Civilizations Would Conquer the Galaxy 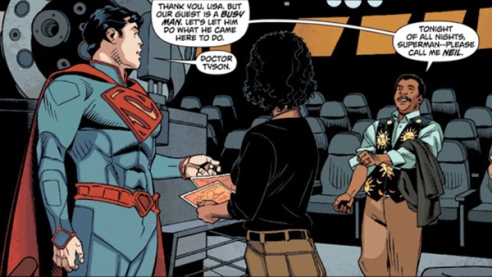 Every self-respecting geek knows that Superman was sent to Earth right before his home planet of Krypton exploded. It’s also part of comic-book lore that Krypton orbited a red star, as the switch to our yellow star’s light is supposedly what imbues Superman with his powers.

Now famed astronomer Neil deGrasse Tyson has used his power of scientific reasoning to help pin down a real-life red star that could have hosted the home of the Man of Steel.

Red stars can scale from dim dwarfs to mighty supergiants. But as astronomer Phil Plait explains, the lifetime of a red supergiant would probably be too short for the advanced Kryptonian civilisation to emerge, while known red giants are too far away from Earth to fit with Superman’s back story. That means Krypton had to orbit a red dwarf, which can be older and closer.

Putting together colour, size and distance, Tyson has chosen the red dwarf LHS 2520, which is smaller and cooler than our sun and lies about 27 light years away in the constellation Corvus.

In the upcoming Action Comics Superman #14, Superman visits Hayden Planetarium in New York City to observe his home star system with Tyson’s help – presumably to vanquish some kind of interstellar evil. Plait offers one clue to the plot: Superman is 27 years old in the comic.

Although LHS 2520 isn’t visible to the naked eye, if you have a telescope and would like to take a look for yourself, the coordinates for the star are:

Researchers devised a formula to find the total amount of kinetic energy (E) needed in relation to the volume of the asteroid pieces (⅔πr3), their density (ρ), the clearance radius (R) which was taken as the radius of Earth plus 400 miles, the asteroid’s pre-detonation velocity (ν1) and its distance from Earth at the point of detonation (D) [physics.le.ac.uk]

According to the internet hysteria surrounding the ancient Mayan calendar, an asteroid could be on its way to wipe out the world on December 21, 2012. Obviously this is pretty unlikely — but if an asteroid really is on its way, could we take a cue from the disaster movie Armageddon in order to save the planet?

According to science research carried out by University of Leicester physics students, the answer is definitely “no.”

In the 1998 film, Bruce Willis plays an oil-drilling platform engineer who lands on the surface of an Earth-bound asteroid, drills to the centre and detonates a nuclear weapon, splitting the asteroid in half.

The two pieces of the asteroid then pass either side of Earth, saving the planet’s population from annihilation.

But the group of four MPhys students worked out that this method would not work, as we simply do not have a bomb powerful enough.

Students Ben Hall, Gregory Brown, Ashley Back and Stuart Turner found that the device would need to be about a billion times stronger than the biggest bomb ever detonated on Earth — the Soviet Union’s 50 megaton hydrogen bomb “Big Ivan” — in order to save the world from a similar sized asteroid.

To do this, they devised a formula to find the total amount of kinetic energy (E) needed in relation to the volume of the asteroid pieces (⅔πr3), their density (ρ), the clearance radius (R) which was taken as the radius of Earth plus 400 miles, the asteroid’s pre-detonation velocity (ν1) and its distance from Earth at the point of detonation (D).

Using the measurements and properties of the asteroid as stated in the film, the formula revealed that 800 trillion terajoules of energy would be required to split the asteroid in two with both pieces clearing the planet. However, the total energy output of “Big Ivan” only comes to 418,000 terajoules.

In other words, we would need to construct a bomb about a billion times stronger than the most powerful weapon ever built in order to save the world in this way.

They also found that scientists would have to detect the asteroid much earlier if we were to have any chance of splitting the asteroid in time.

On top of this, the asteroid would need to be split at almost the exact point that it could feasibly be detected at 8 billion miles.

This would leave no time for Bruce to travel to the asteroid and drill into its centre — let alone share any meaningful moments with Ben Affleck or Liv Tyler along the way.

Student Ben Hall, 22, from Haverhill, near Cambridge, said: “One possible alternative method would be moving the asteroid via propulsion methods attached to it. What is certain is that most methods would require very early detection of such an asteroid and very careful planning in deriving a solution.

“I really enjoyed the film Armageddon and up until recently never really considered the plausibility in the science behind the movie. But after watching it back I found myself being more sceptical about the film in many areas.

“I think that directors attempt to make films scientifically-accurate but find that a lot of trouble is run into in what can and cannot be done, thus leading to falsification in the science to make movies more interesting or visually appealing to the audience.

The journal is published every year, and features original short papers written by students in the final year of their four-year Master of Physics degree.

Ben, who graduated with a First last month and is due to start working at Coalville-based optical technology company Zeeko in August, added: “The module was great fun to be involved with as it allowed for us to get our creative juices flowing and attack original problems from different angles. The whole publishing and reviewing process also gave us a very good taster of what it is like to publish papers in the ‘real world’ as well as being a good simulation of the problems that arise when doing so.”

The other three group members also graduated with Firsts, and are set to start PhDs.

Course leader Dr Mervyn Roy, a lecturer at the University’s Department of Physics and Astronomy, said: “A lot of the papers published in the Journal are on subjects that are amusing, topical, or a bit off-the-wall. Our fourth years are nothing if not creative! But, to be a research physicist — in industry or academia — you need to show some imagination, to think outside the box, and this is certainly something that the module allows our students to practice.

“Most of our masters students hope to go on to careers in research where a lot of their time will be taken up with scientific publishing — writing and submitting papers, and writing and responding to referee reports.

“This is another area where the module really helps. Because Physics Special Topics is run exactly like a professional journal, the students get the chance to develop all the skills they will need when dealing with high profile journals like Nature or Science later on in life.”

‘In a sense, we’ve run that experiment,’ says Seth Shostak, chief alien hunter at the Search for Extraterrestrial Intelligence

Seti uses the Allen Telescope Array to monitor thousands of stars for radio signals that have the imprint of alien intelligence. Photograph: Ben Margot/AP

physics4me
Create a free website or blog at WordPress.com.