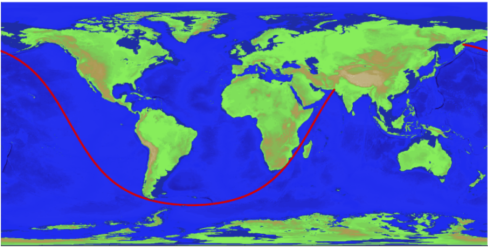 Rohan Chabukswar, Kushal Mukherjee
There has been some interest recently in determining the longest distance one can sail for on the earth without hitting land, as well as in the converse problem of determining the longest distance one could drive for on the earth without encountering a major body of water. In its basic form, this is an optimisation problem, rendered chaotic by the presence of islands and lakes, and indeed the fractal nature of the coasts. In this paper we present a methodology for calculating the two paths using the branch-and-bound algorithm.

The ‘north pole’ — that is, the direction of magnetic north — was reversed a million years ago. This map shows how, starting about 789,000 years ago, the north pole wandered around Antarctica for several thousand years before flipping 786,000 years ago to the orientation we know today, with the pole somewhere in the Arctic.

By Robert Sanders
BERKELEY — Imagine the world waking up one morning to discover that all compasses pointed south instead of north.

It’s not as bizarre as it sounds. Earth’s magnetic field has flipped – though not overnight – many times throughout the planet’s history. Its dipole magnetic field, like that of a bar magnet, remains about the same intensity for thousands to millions of years, but for incompletely known reasons it occasionally weakens and, presumably over a few thousand years, reverses direction.

Now, a new study by a team of scientists from Italy, France, Columbia University and the University of California, Berkeley, demonstrates that the last magnetic reversal 786,000 years ago actually happened very quickly, in less than 100 years – roughly a human lifetime.

“It’s amazing how rapidly we see that reversal,” said UC Berkeley graduate student Courtney Sprain. “The paleomagnetic data are very well done. This is one of the best records we have so far of what happens during a reversal and how quickly these reversals can happen.”

Sprain and Paul Renne, director of the Berkeley Geochronology Center and a UC Berkeley professor-in- residence of earth and planetary science, are coauthors of the study, which will be published in the November issue of Geophysical Journal International and is now available online. END_OF_DOCUMENT_TOKEN_TO_BE_REPLACED

A pair of researchers, Richard Holme of the University of Liverpool in the U.K. and Olivier de Viron of the University of Paris, in France has found that the length of Earth’s days follows a cyclic oscillation pattern every 5.9 years. As the two describe in their paper published in the journal Nature, the variations in day length were discovered as part of a study examining day-length over the past 50 years.

The form of core motions giving rise to variations in Earth’s length of day.

The time it takes the Earth to spin once around its axis varies by milliseconds on any given day. This is due to the impact of weather patterns, ocean currents and other factors. But the Earth is also subject to other forces that can cause the length of day to vary over the long term or even for short “jumps” of time. In this new effort, the researchers looked at data from the past 50 years and then filtered out those short term forces that cause daily fluctuations in day-length. In so doing, they found what they describe as a ten year “decadally varying trend” a 5.9 year cycle of day-length oscillations and times when the planet seems to jerk, temporarily changing the length of the days that follow.
Unlike the ten year trend (believed to be caused by changes in the Earth’s core) and the episodic jerks (scientists have detected 10 such events since 1969) the 5.9 year cycle was unexpected. Every 5.9 years, they claim, the planet undergoes a period of several months where the length of each day is longer or shorter than “normal.” The researchers don’t know what causes the cycle but suspect it has something to do with the core-mantle boundary.
Scientists are also interested in learning more about the episodic jerks that alter day-length for several months at a time—this new research has revealed that during each event, the Earth’s geomagnetic field undergoes a similar effect. Scientists don’t know why either occurs, but suspect they are connected.

Research into Earth’s day-length changes as well as studies seeking to better understand the true makeup of the planet are not just academic pursuits—gains in understanding are used by geologists and engineers in mining and exploration efforts.

This artist’s view depicts the different layers of the Earth and their representative temperatures: crust, upper and lower mantle (brown to red), liquid outer core (orange) and solid inner core (yellow). The pressure at the border between the liquid and the solid core (highlighted) is 3.3 million atmospheres, with a temperature now confirmed as 6000 degrees Celsius. Credit: ESRF

Scientists have determined the temperature near the Earth’s centre to be 6000 degrees Celsius, 1000 degrees hotter than in a previous experiment run 20 years ago. These measurements confirm geophysical models that the temperature difference between the solid core and the mantle above, must be at least 1500 degrees to explain why the Earth has a magnetic field. The scientists were even able to establish why the earlier experiment had produced a lower temperature figure. The results are published on 26 April 2013 in Science….
… Read more at: http://phys.org/news/2013-04-earth-center-degrees-hotter-previously.html#jCp 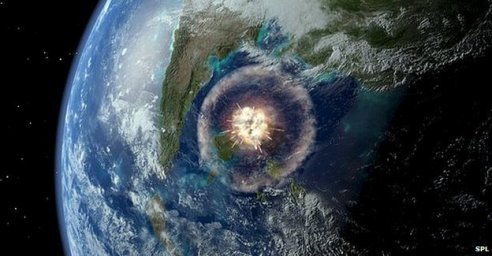 The space rock that hit Earth 65m years ago and is widely implicated in the end of the dinosaurs was probably a speeding comet, US scientists say.

Researchers in New Hampshire suggest the 180km-wide Chicxulub crater in Mexico was carved out by a smaller object than previously thought.

Many scientists consider a large and relatively slow moving asteroid to have been the likely culprit.

Details were outlined at the 44th Lunar and Planetary Science Conference.

But other researchers were more cautious about the results.

“The overall aim of our project is to better characterise the impactor that produced the crater in the Yucatan peninsula [in Mexico],” Jason Moore, from Dartmouth College in New Hampshire, told BBC News.

The space rock gave rise to a global layer of sediments enriched in the chemical element iridium, in concentrations much higher than naturally occurs; it must have come from outer space.

However, in the first part of their work, the team suggests that frequently quoted iridium values are incorrect. Using a comparison with another extraterrestrial element deposited in the impact – osmium – they were able to deduce that the collision deposited less debris than has previously been supposed …..
…. Read more at: http://www.bbc.co.uk/news/science-environment-21709229

Read also:
Zircon U-Pb Geochronology Links the End-Triassic Extinction with the Central Atlantic Magmatic Province
Terrence J. Blackburn et al
The end-Triassic extinction is characterized by major losses in both terrestrial and marine diversity, setting the stage for dinosaurs to dominate Earth for the next 136 million years. Despite the approximate coincidence between this extinction and flood basalt volcanism, existing geochronologic dates have insufficient resolution to confirm eruptive rates required to induce major climate perturbations. Here, we present new zircon U-Pb geochronologic constraints on the age and duration of flood basalt volcanism within the Central Atlantic Magmatic Province. This chronology demonstrates synchroneity between the earliest volcanism and extinction, tests and corroborates the existing astrochronologic time scale, and shows that the release of magma and associated atmospheric flux occurred in four pulses over ~600,000 years, indicating expansive volcanism even as the biologic recovery was under way….
… http://www.sciencemag.org/content/early/2013/03/20/science.1234204

physics4me
Create a free website or blog at WordPress.com.