Vitor Lara, Kaled Dechoum
When a circular loop composed by a RLC is put to oscillate, the oscillation will eventually vanish in an exponentially decaying current, even considering superconducting wires, due to the emission of electric and magnetic dipole radiation.
In this work we propose a modification on the Kirchhoff voltage law by adding the radiative contributions to the energy loss as an effective resistance, whose value is relatively small when compared to typical resistance value, but fundamental to describe correctly real circuits.
We have also analysed the change in the pattern of the radiation spectra emitted by the circuit as we vary both the effective and electrical resistance…
… read more at http://arxiv.org/pdf/1410.0618v1.pdf 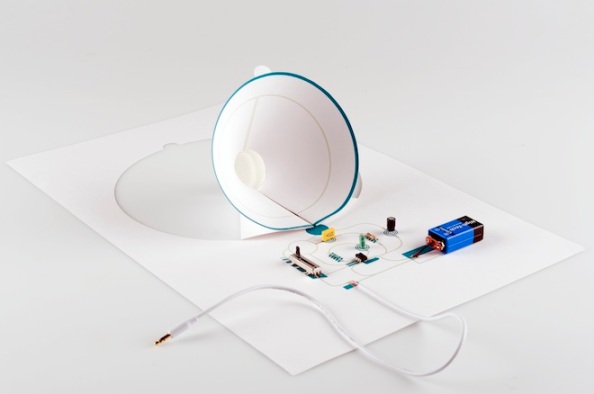 BY LIZ STINSON
If you’re the tinkering type, you’ve probably deconstructed a fair number of electronics. It doesn’t take a genius to tear apart a radio, but once you get past the bulk of plastic packaging and down to the guts, you begin to realize that reading the mess of circuits, chips and components is like trying to navigate your way through a foreign country with a map from the 18th century.
But it doesn’t have to be so complicated, says Coralie Gourguechon. “Nowadays, we own devices that are too complicated considering the way we really use them,” she says. Gourguechon, maker of the Craft Camera, believes that in order to understand our electronics, they need to be vastly simpler and more transparent than they currently are.

Which is why the France-based product designer decided to totally deconstruct them. In her most recent project, Gourguechon has created a series of paper electronics—an amplifier, speaker and radio—stripped down to their most basic components and fitted onto a single sheet of paper. “The idea was that the sheet of paper become the object, with no complicated assembly needed,” she says.

The anatomy of each gadget’s operating system is outlined in bold icons, like an anatomical roadmap that teaches users how to build the object. Each graphical representation has a function: the circuit icons teach users what connects to what, the anatomical chart shows the inner workings of the components and the patterns of the paper modules help users to shape their own paper circuit. “I saw this as a map, that could help for the assembly of the product, or in order to repair it,” she says.

All of the components are linked together through a series of lines that are printed with conductive ink, which allows the paper electronics to actually function. To turn the speaker on, for example, you pop out the sound cone in order to amplify your input. To close the circuit and turn it off, you simply lay the cone flat.

It’s hard to believe, but the devices are totally functional, if a little on the weak side. “It does sound quite good considering the simplicity of the device; of course it’s not as clear as a regular speaker, the sound is lower and low frequencies do not go out very well.”

Though this is just a prototype, Gourguechon says that she can envision a day where paper electronics could be part of a massive database of pattern modules that users could simply print out and assemble. I’m particularly interested into open systems and about the oncoming technologies that could help building this alternatives,” she says. I’m looking forward to the progress of printed electronics, both 2D and 3D. I hope that we will find an effective way of solving the problem of electronic waste, which is growing quickly.”
Read more at http://www.wired.com/design/2013/12/a-tiny-speaker-made-out-of-paper/?cid=co16124664#slideid-374581

J. Franklin, C. LaMont
We re-visit the problem of two (oppositely) charged particles interacting electromagnetically in one dimension with retarded potentials and no radiation reaction.
The specific quantitative result of interest is the time it takes for the particles to fall in towards one another.
Starting with the non-relativistic form, we answer this question while adding layers of complexity until we arrive at the full relativistic delay differential equation that governs this problem.
That case can be solved using the Synge method, which we describe and discuss.
Read more at http://arxiv.org/pdf/1310.4875v1.pdf 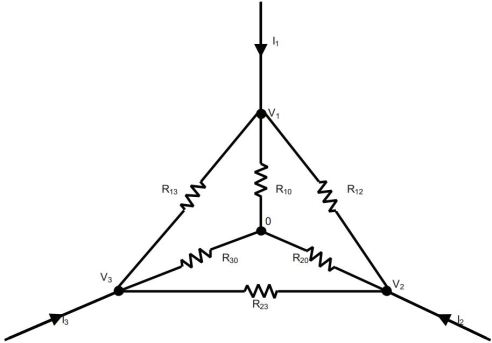 Jason Shulman, Frank Malatino, Matthew Widjaja, Gemunu H. Gunaratne
Kirchhoff’s laws offer a general, straightforward approach to circuit analysis.
Unfortunately, use of the laws becomes impractical for all but the simplest of circuits. This work presents a novel method of analyzing direct current resistor circuits.
It is based on an approach developed to model complex networks, making it appropriate for use on large, complicated circuits. It is unique in that it is not an analytic method.
It is based on experiment, yet the approach produces the same circuit equations obtained by more traditional means.
Read more at http://arxiv.org/pdf/1309.4848v1.pdf