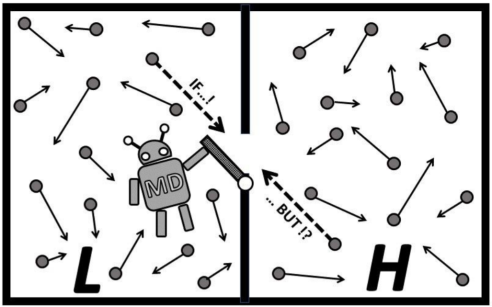 Milivoje M. Kostic
A demonic being, introduced by Maxwell, to miraculously create thermal non-equilibrium and violate the Second law of thermodynamics, has been among the most intriguing and elusive wishful concepts for over 150 years. Maxwell and his followers focused on ‘effortless gating’ a molecule at a time, but overlooked simultaneous interference of other chaotic molecules, while the demon exorcists tried to justify impossible processes with misplaced ‘compensations’ by work of measurements and gate operation, and information storage and memory erasure with entropy generation. The illusive and persistent Maxwell’s demon fallacies by its advocates, as well as its exorcists, are scrutinized and resolved here. Based on holistic, phenomenological reasoning, it is deduced here that a Maxwell’s demon operation, against natural forces and without due work effort to suppress interference of competing thermal particles while one is selectively gated, is not possible at any scale, since it would be against the physics of the chaotic thermal motion, the latter without consistent molecular directional preference for selective timing to be possible. Maxwell’s demon would have miraculous useful effects, but also some catastrophic consequences.