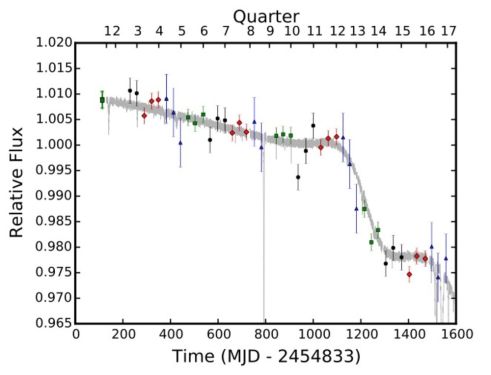 Over the four years that the Kepler telescope monitored this mysterious star, its light levels dropped by a total of about 3 percent–but not all at a constant rate. (For reference, the huge dip at the 800 mark is one of the huge dips that originally tipped off scientists that this was a freakin’ weird star. “It was off the charts,” says Montet.)

Benjamin T. Montet, Joshua D. Simon
KIC 8462852 is a superficially ordinary main sequence F star for which Kepler detected an unusual series of brief dimming events. We obtain accurate relative photometry of KIC 8462852 from the Kepler full frame images, finding that the brightness of KIC 8462852 monotonically decreased over the four years it was observed by Kepler. Over the first ~1000 days, KIC 8462852 faded approximately linearly at a rate of 0.341 +/- 0.041 percent per year, for a total decline of 0.9%. KIC 8462852 then dimmed much more rapidly in the next ~200 days, with its flux dropping by more than 2%. For the final ~200 days of Kepler photometry the magnitude remained approximately constant, although the data are also consistent with the decline rate measured for the first 2.7 yr. Of a sample of 193 nearby comparison stars and 355 stars with similar stellar parameters, 0.6% change brightness at a rate as fast as 0.341 +/- 0.041 percent per year, and none exhibit either the rapid decline by >2% or the cumulative fading by 3% of KIC 8462852. We examine whether the rapid decline could be caused by a cloud of transiting circumstellar material, finding while such a cloud could evade detection in sub-mm observations, the transit ingress and duration cannot be explained by a simple cloud model. Moreover, this model cannot account for the observed longer-term dimming. No known or proposed stellar phenomena can fully explain all aspects of the observed light curve.