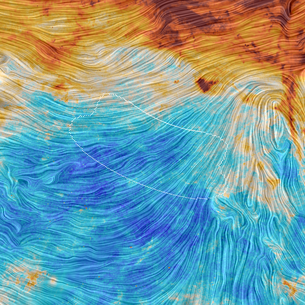 Despite earlier reports of a possible detection, a joint analysis of data from ESA’s Planck satellite and the ground-based BICEP2 and Keck Array experiments has found no conclusive evidence of primordial gravitational waves.

The Universe began about 13.8 billion years ago and evolved from an extremely hot, dense and uniform state to the rich and complex cosmos of galaxies, stars and planets we see today.

An extraordinary source of information about the Universe’s history is the Cosmic Microwave Background, or CMB, the legacy of light emitted only 380 000 years after the Big Bang.

ESA’s Planck satellite observed this background across the whole sky with unprecedented accuracy, and a broad variety of new findings about the early Universe has already been revealed over the past two years.

But astronomers are still digging ever deeper in the hope of exploring even further back in time: they are searching for a particular signature of cosmic ‘inflation’ – a very brief accelerated expansion that, according to current theory, the Universe experienced when it was only the tiniest fraction of a second old.

This signature would be seeded by gravitational waves, tiny perturbations in the fabric of space-time, that astronomers believe would have been generated during the inflationary phase.

Interestingly, these perturbations should leave an imprint on another feature of the cosmic background: its polarisation.

When light waves vibrate preferentially in a certain direction, we say the light is polarised.

The CMB is polarised, exhibiting a complex arrangement across the sky. This arises from the combination of two basic patterns: circular and radial (known as E-modes), and curly (B-modes).

Different phenomena in the Universe produce either E- or B-modes on different angular scales and identifying the various contributions requires extremely precise measurements. It is the B-modes that could hold the prize of probing the Universe’s early inflation.

“Searching for this unique record of the very early Universe is as difficult as it is exciting, since this subtle signal is hidden in the polarisation of the CMB, which itself only represents only a feeble few percent of the total light,” says Jan Tauber, ESA’s project scientist for Planck.

Planck is not alone in this search. In early 2014, another team of astronomers presented results based on observations of the polarised CMB on a small patch of the sky performed 2010–12 with BICEP2, an experiment located at the South Pole. The team also used preliminary data from another South Pole experiment, the Keck Array.

They found something new: curly B-modes in the polarisation observed over stretches of the sky a few times larger than the size of the full Moon.

The BICEP2 team presented evidence favouring the interpretation that this signal originated in primordial gravitational waves, sparking an enormous response in the academic community and general public.

However, there is another contender in this game that can produce a similar effect: interstellar dust in our Galaxy, the Milky Way.
Read more at www.esa.int