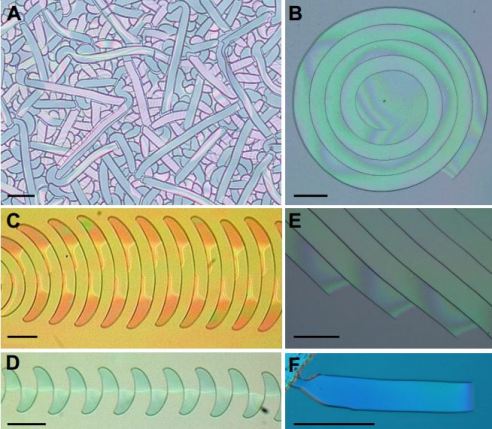 Dry mud and glaze on pottery will crack when placed under stress, often producing a crisscrossing fracture network on the surface. Most of these seemingly random crack patterns are well understood, but certain coatings, such as metal and silica nanofilms, can exhibit spiral-shaped cracks and other regular patterns that cannot be produced by known fracture mechanisms. A new study in Physical Review Letters reveals that these peculiar patterns can arise when new cracks are formed by the spontaneous replication of an initial crack template.

The standard picture of crack formation in a thin film is based on the competition between elastic forces and fracture energy. Under tensile stress, the elastic energy builds up until it is greater than the energy that it takes to break the film, at which point the stress is released and the film splits along a straight channel. This theory predicts that a new crack will tend to be deflected in the close vicinity of a previous one and cross it perpendicularly. As a result, disordered crack patterns are expected.

Joël Marthelot of ESPCI Paris-Tech in France and his colleagues investigated anomalous, ordered cracks (e.g., Archimedean spirals and alleys of crescents) in spin-on-glass coatings—a type of coating used in modern electronics and laser technologies. The team observed that new cracks formed at a set distance from previous cracks, suggesting that cracks can replicate, in a periodic fashion, an initial crack pattern. To explain their findings, they propose a new fracture mechanism in which stress on the film is released by simultaneous fracturing and delaminating (i.e., peeling off of the surface). The model explains how the crack-separation distance depends exclusively on the thickness of the film and how various ordered patterns can result from different triggering mechanisms. – Michael Schirber – physics.aps.org – arxiv.org/pdf