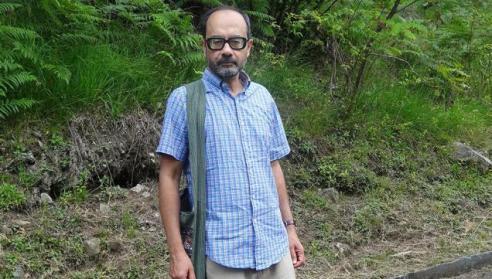 Ashoke Sen, String Theory expert from Harish Chandra Research Institute, Allahabad, is one of the three recipients of the Dirac Medal awarded by International Centre for Theoretical Physics (ICTP) this year. Professor Sen, who receives this prize for his work on black holes and symmetries of string theory, communicates his thoughts in an e-mail interview with Shubashree Desikan – thehindu.com

How do you feel on receiving this prize?

I certainly feel very honoured and happy to receive this prize. This prize is particularly important for me because this is given by ICTP which has played a significant role in the development of science in the developing countries. My own association with ICTP goes back to about 30 years.

Can you explain your work on symmetries of string theory?

My work on symmetries of string theory is on what is known as strong-weak coupling duality or S-duality.

A symmetry refers to a transformation under which an object looks the same. For example a square has 90 degrees rotational symmetry; if we rotate it by 90 degrees about its centre, it looks the same. Before my work, it had been suspected for a while by a few people (Montonen and Olive; Osborn; Duff and his collaborators; Font, Quevedo, Lust and Rey; myself; Schwarz and others) that string theory, and its close cousin, quantum field theories, had some unusual symmetries which are not easily visible. However because such symmetries were not easily visible, it was hard to decide if they are really there, and very few people took this idea seriously.

In my work in 1994, I showed how one can do concrete calculations to test whether such symmetries are really there and I worked out an explicit example which gave non-trivial evidence for such a symmetry. Later this technique was used in many other cases, and led to the discovery of many such symmetries. Eventually based on these results string theorists came to realise that what people thought earlier as different theories are all different ways of describing the same underlying theory. This unified all string theories into one theory.

The citation also mentions your work on black holes, what was this work?

As a result one could neither verify nor refute their proposal reliably. My contribution (in 1995) was to identify a specific system with large amount of symmetry that allowed us to do this calculation reliably. The results from black holes indeed matched those of the elementary particles in that system, giving concrete evidence that small black holes indeed describe elementary particles.

But string theory often faces a lot of flak as being a theory that can never be probed by experiment. So what is the justification for studying it?

String theory tries to give a unified description of all particles and forces operating between them.

One of the main successes of string theory is that it has been able to unify the general theory of relativity, which describes gravity, and quantum mechanics.

Unfortunately a direct test of string theory requires colliding extremely high energy particles and observing the result of this collision. It is impossible to achieve this with present technology.

This problem is not unique to string theory.

Any direct experimental test of quantum nature of gravity will require such high energy collisions. Given that such energies are not available today, we have two choices: either give up attempts to find a quantum theory of gravity or try to use existing knowledge to do the best we can. String theory follows the second path.

Requiring that the theory is mathematically consistent has led to many new results in mathematics. Without these mathematical relations, string theory would fail to be a consistent theory.

But so far all such new relations found in string theory have proved to be correct, providing further evidence for the underlying consistency of the theory.