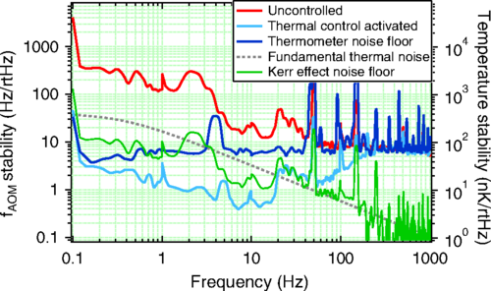 University of Adelaide physics researchers have produced the world’s most sensitive thermometer – three times more precise than the best thermometers in existence.

Published in the journal Physical Review Letters, the researchers from the University’s Institute for Photonics and Advanced Sensing (IPAS) report they have been able to measure temperature with a precision of 30 billionths of a degree.

“We believe this is the best measurement ever made of temperature − at room temperature,” says project leader Professor Andre Luiten, Chair of Experimental Physics in IPAS and the School of Chemistry and Physics, pointing out that it is possible to make more sensitive measurements of temperature in cryogenic environments (at very low temperatures) near absolute zero.

“We’ve been able to measure temperature differences to 30 billionths of a degree in one second,” says Professor Luiten. “To emphasise how precise this is, when we examine the temperature of an object we find that it is always fluctuating. We all knew that if you looked closely enough you find that all the atoms in any material are always jiggling about, but we actually see this unceasing fluctuation with our thermometer, showing that the microscopic world is always in motion.”

The paper – Nano-Kelvin Thermometry and Temperature Control: Beyond the Thermal Noise Limit – describes a new and very sensitive, but unorthodox, thermometer that uses light to measure temperature. PhD candidate Wenle Weng carried out the work.

The thermometer injects two colours of light (red and green) into a highly polished crystalline disk. The two colours travel at slightly different speeds in the crystal, depending on the temperature of the crystal.

“When we heat up the crystal we find that the red light slows down by a tiny amount with respect to the green light,” Professor Luiten says.

“By forcing the light to circulate thousands of times around the edge of this disk in the same way that sound concentrates and reinforces itself in a curve in a phenomena known as a “whispering gallery” – as seen in St Paul’s Cathedral in London or the Whispering Wall at Barossa Reservoir – then we can measure this minuscule difference in speed with great precision.”

Professor Luiten says the researchers have developed a new technique which could be redesigned for ultra-sensitive measurements of other things such as pressure, humidity, force or searching for a particular chemical.

“Being able to measure many different aspects of our environment with such a high degree of precision, using instruments small enough to carry around, has the capacity to revolutionise technologies used for a variety of industrial and medical applications where detection of trace amounts has great importance,” Professor Luiten says.

The research is supported by the Australian Research Council and the South Australian Government’s Premier’s Science and Research Fund.