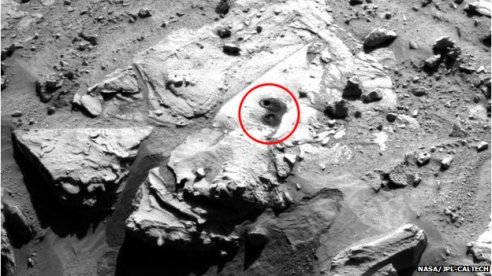 The upper hole is the new sample site; the lower hole was the test that was drilled last week

Nasa’s Curiosity rover has drilled a hole in a Martian rock with the intention of taking a powdered sample for its onboard laboratories to study.

It is nearly 12 months since the power tool was last deployed for the purpose.

Pictures downlinked from the planet on Tuesday revealed a neat hole had been hammered in a rock dubbed “Windjana”.

It is hoped this sandstone can yield insights on the geochemical processes that have helped shape the landscape at the bottom of Mars’ Gale Crater.

The sample acquisition manoeuvre comes a week after the rover drilled a small test hole in the same rock slab.

The new hole, just a few centimetres to the side, is noticeably deeper.

By going further into the rock, tailings will have been forced up and into the tool’s collection chamber.

Scientists and engineers must now decide whether this material has the right properties to pass to the CheMin and SAM instruments that live inside the vehicle’s belly.

If the “go” is given, just a pinch of the powder will be dropped into the labs’ analytical bays.

Project scientist John Grotzinger said his team was seeking further information on the role played by water in fixing the sediments that make up many of the rocks on the crater floor.

“We’re most interested to find clues as to the aqueous geochemistry which resulted in cementation of the sedimentary rocks,” he told the BBC this week.

“These have all turned out to be much harder than we expected, and if we could get a sense of their mineralogy and chemistry, we might better understand the composition and history of groundwater in the region – also an important type of potentially habitable environment.”

In its 21 months on Mars, Curiosity has already established that the conditions in Gale billions of years ago could have very comfortably supported micro-organisms – had they been present.

This assessment followed the drilling and analysis of samples from fine-grained mudstones. They suggested the crater once held a lake.

And the many rounded pebbles the rover saw as it rolled towards the site of the mudstones hinted at the action of the water streams that may have fed that lake.

One immediate and obvious difference with the new sandstone hole compared with those earlier mudstone acquisitions is the colour of the tailings. The Windjana material is markedly darker.

“Obviously the mineralogy and chemistry will have to wait until we have all the CheMin and SAM data, but the team is excited to have seen a darker colour,” said Prof Grotzinger.

Curiosity will have been on Mars for two Earth years on 6 August.

Its original aim in that time was to make for – and study – the foothills of the big mountain that dominates the centre of Gale Crater.

But such have been the geological treasures on the “road” to Mount Sharp that the robot has been greatly delayed in its travels. And it is months away still from arriving at the primary investigation site.

US space agency officials seem relaxed about the slower than anticipated roving because Curiosity has already achieved its main scientific goals.

Nonetheless, there are some boxes yet to be ticked.

One concerns the unambiguous detection of organic (carbon-rich) molecules in Gale’s sediments.

Although not a direct indicator of past life, organics certainly play into any discussion about the potential for biology.

Life as we know it trades on carbon chemistry, and so finding these complex molecules would add an extra dimension to the quest to establish the habitability of Gale in Mars’ distant past.

The problem is that any organics near the surface of the planet are quickly broken down and destroyed by the space radiation that constantly rains down on the planet.

The trick is to find locations that have been exposed only very recently by the erosive action of the wind. The Curiosity team believes Windjana to be just such a location.