Astronomers using NASA’s Swift X-ray Telescope have observed a spinning neutron star suddenly slowing down, yielding clues they can use to understand these extremely dense objects.

A neutron star is the crushed core of a massive star that ran out of fuel, collapsed under its own weight, and exploded as a supernova. A neutron star can spin as fast as 43,000 times per minute and boast a magnetic field a trillion times stronger than Earth’s. Matter within a neutron star is so dense a teaspoonful would weigh about a billion tons on Earth. 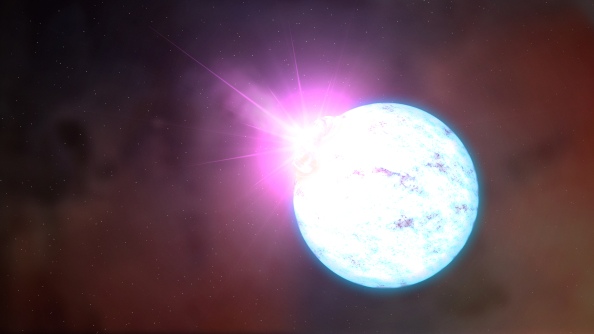 This neutron star, 1E 2259+586, is located about 10,000 light-years away toward the constellation Cassiopeia. It is one of about two dozen neutron stars called magnetars, which have very powerful magnetic fields and occasionally produce high-energy explosions or pulses.

Observations of X-ray pulses from 1E 2259+586 from July 2011 through mid-April 2012 indicated the magnetar’s rotation was gradually slowing from once every seven seconds, or about eight revolutions per minute. On April 28, 2012, data showed the spin rate had decreased abruptly, by 2.2 millionths of a second, and the magnetar was spinning down at a faster rate…..
… Read more: http://www.nasa.gov/mission_pages/swift/bursts/new-phenom.html

Read also: An anti-glitch in a magnetar