By Jason Palmer
A new set of “eyes” to capture the Universe’s highest-energy particles and light has snapped its first image.

The High-Altitude Water Cherenkov Observatory or Hawc, high on a Mexican plain, now holds the record for the highest-energy light it can capture.

The image – of the shadow cast by the Moon as it blocks the light and particles – was shown off at a meeting of the American Physical Society.

Each one is a 7.3m-diameter, 4m-high tank filled with pure water.

They dot the landscape at an altitude of 4,100m in a national park near the Mexican city of Puebla.

But they do not capture the cosmic rays and gamma rays directly.

When the cosmic rays and gamma rays smash into molecules in the Earth’s atmosphere, they set off a cascade of other fast-moving particles.

It is these that the “Cherenkov” detectors actually track.

Faster than light
While the speed of light in a vacuum cannot be exceeded, the speed in matter can be much slower.

When the fast-moving particles created in the atmosphere break this speed limit inside the water of the Hawc tanks, they give off flashes of light that detectors at the tanks’ bottoms can catch.

Cherenkov telescopes such as the Hess array in Namibia or the Magic facility in the Canary Islands catch this process directly from the atmosphere when the particles first arrive at Earth. 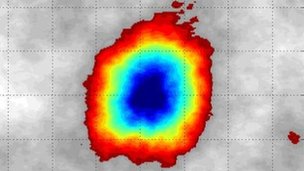 The image shows the “shadow” of the Moon, which blocks the arrival of cosmic rays

But while Hawc catches fewer of these events high in the atmosphere, it can survey more in a given night – or day, said Hawc collaboration member Tom Weisgarber of the University of Wisconsin-Madison.

“We’re very complementary to these other instruments – but we see a very large fraction of the sky,” he told BBC News.

“Hawc doesn’t need to point in one location, and it’s unaffected by the Sun, the Moon, the weather or anything – it just depends on the atmosphere being there.”

It also claims the crown for highest-energy light we can detect – up to 100 TeV, or tens of trillions of times more energetic than the visible light we can see.

Particles and light with these blistering energies give insights into the most violent processes the cosmos hosts, from the leftovers of supernovas to supermassive black holes eating matter.

Only by catching them can we understand just how these regions create them.

But Hawc is just starting its mission, and to make sure that its first 30 detectors are working as expected, the team snapped an image exactly where it did not expect any cosmic rays – the Moon’s shadow.

A fuller array of 100 detectors should be up and running by August.