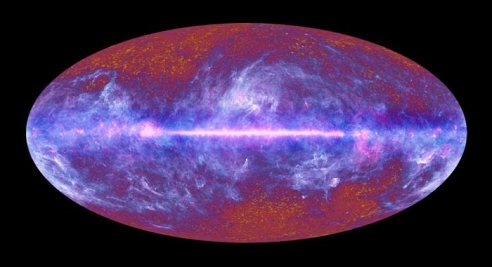 The latest results from the Planck space telescope have confirmed the presence of a microwave haze at the centre of the Milky Way. However, the haze appears to be more elongated than originally thought, which casts doubt over previous claims that annihilating dark matter is the cause of the emissions.
A roughly spherical haze of radiation at the heart of our galaxy was identified as far back as 2004 by the Wilkinson Microwave Anisotropy Probe (WMAP). Since then, some astrophysicists have suggested that this haze is produced by annihilating dark-matter particles.
However, some researchers have questioned whether the haze actually exists at all, suggesting that it could be an artefact of how the WMAP data were analysed. Doubts were raised as to whether WMAP was capable of picking out this weak signal buried deep in emissions from galactic dust, the cosmic microwave background (CMB) and other noise from hectic regions of the galaxy.
It is definitely there
The argument now seems to have been settled by the latest results from Planck, a European Space Agency mission launched in May 2009. “Crudely speaking, we agree with all the WMAP results,” explains Krzysztof Gorksi of NASA’s Jet Propulsion Laboratory in California, who is a member of the Planck team. “Planck is more sensitive, and has a greater frequency range, taking us into a realm that WMAP couldn’t even see,” he told physicsworld.com. One of the telescope’s main objectives is to accurately map fluctuations in the CMB, so it is well suited to subtracting that radiation to reveal the haze.
With the presence of the haze independently verified, focus has returned to determining its origin. After its original discovery, some researchers, including Dan Hooper of Fermilab near Chicago, US, argued that annihilating dark matter could explain the galactic haze. Dark matter has long been thought to bind galaxies together, but detecting it directly has remained elusive. In Hooper’s mechanism, dark-matter particles annihilate to produce conventional electrons and positrons. These particles then spiral around the Milky Way’s magnetic field to produce the radiation we see as the microwave haze……….
Read more: physicsworld.com