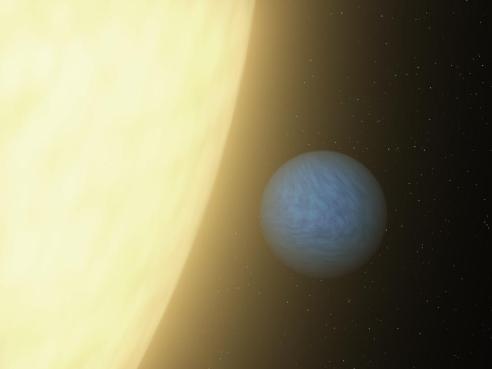 Seen here in this artist’s concept, the planet is called 55 Cancri e. It’s a toasty world that rushes around its star every 18 hours. Image credit: NASA/JPL-Caltech

NASA’s Spitzer Space Telescope has detected light emanating from a “super-Earth” planet beyond our solar system for the first time. While the planet is not habitable, the detection is a historic step toward the eventual search for signs of life on other planets.

“Spitzer has amazed us yet again,” said Bill Danchi, Spitzer program scientist at NASA Headquarters in Washington. “The spacecraft is pioneering the study of atmospheres of distant planets and paving the way for NASA’s upcoming James Webb Space Telescope to apply a similar technique on potentially habitable planets.”

This artist’s animation depicts 55 Cancri e as it orbits its star. The planet whips around the star closely and quickly: It is 25 times closer to the star than Mercury is to our sun and completes one orbit — its year — in a mere 18 hours.

The planet, called 55 Cancri e, falls into a class of planets termed super Earths, which are more massive than our home world but lighter than giant planets like Neptune. The planet is about twice as big and eight times as massive as Earth. It orbits a bright star, called 55 Cancri, in a mere 18 hours.

Previously, Spitzer and other telescopes were able to study the planet by analyzing how the light from 55 Cancri changed as the planet passed in front of the star. In the new study, Spitzer measured how much infrared light comes from the planet itself. The results reveal the planet is likely dark, and its sun-facing side is more than 2,000 Kelvin (3,140 degrees Fahrenheit), hot enough to melt metal.

The new information is consistent with a prior theory that 55 Cancri e is a water world: a rocky core surrounded by a layer of water in a “supercritical” state where it is both liquid and gas, and topped by a blanket of steam. “It could be very similar to Neptune, if you pulled Neptune in toward our sun and watched its atmosphere boil away,” said Michaël Gillon of Université de Liège in Belgium, principal investigator of the research, which appears in the Astrophysical Journal. The lead author is Brice-Olivier Demory of the Massachusetts Institute of Technology in Cambridge. 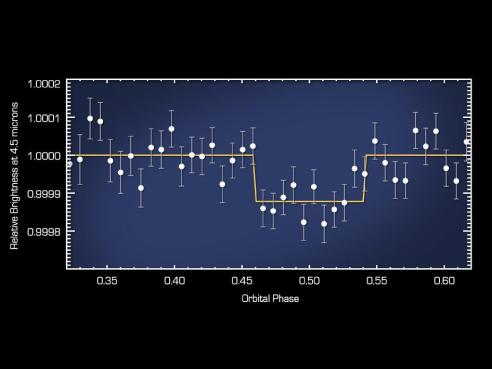 The plot shows how the infrared light from the 55 Cancri system, both the star and planet, changed as the planet passed behind its star in what is called an occultation. When the planet disappeared, the total light dropped, and then increased back to normal levels as the planet circled back into view. The drop indicated how much light came directly from the planet itself. This type of information is important for studying the temperatures and compositions of planetary atmospheres beyond our own

The 55 Cancri system is relatively close to Earth, at 41 light-years away. It has five planets, with 55 Cancri e the closest to the star and tidally locked, so one side always faces the star. Spitzer discovered the sun-facing side is extremely hot, indicating the planet probably does not have a substantial atmosphere to carry the sun’s heat to the unlit side.

NASA’s James Webb Space Telescope, scheduled to launch in 2018, likely will be able to learn even more about the planet’s composition. The telescope might be able to use a similar infrared method to Spitzer to search other potentially habitable planets for signs of molecules possibly related to life.

“When we conceived of Spitzer more than 40 years ago, exoplanets hadn’t even been discovered,” said Michael Werner, Spitzer project scientist at NASA’s Jet Propulsion Laboratory in Pasadena, Calif. “Because Spitzer was built very well, it’s been able to adapt to this new field and make historic advances such as this.”

In 2005, Spitzer became the first telescope to detect light from a planet beyond our solar system. To the surprise of many, the observatory saw the infrared light of a “hot Jupiter,” a gaseous planet much larger than the solid 55 Cancri e. Since then, other telescopes, including NASA’s Hubble and Kepler space telescopes, have performed similar feats with gas giants using the same method.

In this method, a telescope gazes at a star as a planet circles behind it. When the planet disappears from view, the light from the star system dips ever so slightly, but enough that astronomers can determine how much light came from the planet itself. This information reveals the temperature of a planet, and, in some cases, its atmospheric components. Most other current planet-hunting methods obtain indirect measurements of a planet by observing its effects on the star….
Read more: www.nasa.gov