… around a Super Massive Black Hole 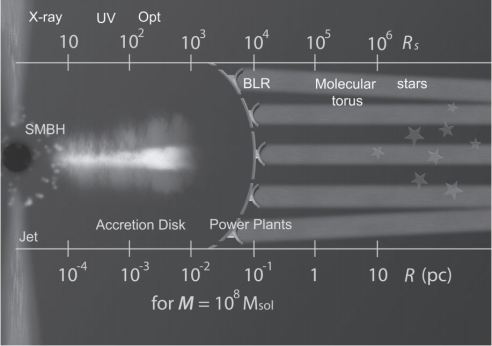 Schematic picture around SMBH. Items are not to scale. In this picture, an example of power plants with transmitters is shown partly. BLR stands for the Broad Line Region. The SMBH and accretion disk will not be fully covered by the collectors of power plants, so as not to prevent jets emanating from somewhere in this area, and accretion flow coming out of the central region. A twin jet is thought to emanate perpendicular to the plane of accretion disk, seen about 10% of AGN. The energy from the power plants is transferred by electro-magnetic waves to habitats of advanced civilizations. In this picture, the beams are directed to a galactic plane on which a galactic club is formed. However, the planes of the accretion disk and the host galaxy may not necessarily be in the same plane

Makoto Inoue, Hiromitsu Yokoo
We describe a new system for a society of highly advanced civilizations around a super massive black hole (SMBH), as an advanced Type III “Dyson Sphere“, pointing out an efficient usage of energy for the advanced civilizations. SMBH also works as a sink for waste materials. Here we assume that Type III civilisations of Kardashev classification [1] form a galactic club [2] in a galaxy, and the energy from the SMBH will be delivered to the club members, forming an energy control system similar to power grids in our present society. The energy is probably transmitted by a sharp beam with coherent electro-magnetic waves, which provide a new concept for the search for extraterrestrial intelligence (SETI) via detection of such energy transmission signals. This expands the search window for other intelligences within the Universe….
(….)
CONCLUDING REMARKS
Figure 1 shows a schematic picture of the power plants and others around SMBH. The condition around SMBH is very promising for an advanced intelligence to manage energy issues in terms of both energy generation and disposition.This idea comes from a combination of Type III and Dyson Sphere. The strong radiation from the accretion disk rotating around SMBH is mainly used, and the waste energy is returned toward the SMBH. The available energy is huge compared to Dyson Sphere of stellar scale, and this type ofcivilization could be called Type III Dyson Sphere. The search for this type of civilization, however, would not likely be revealed from “unintended” communication signal, but detection by coherent radiation from power stations may be more promising….
Read more: http://arxiv.org/pdf