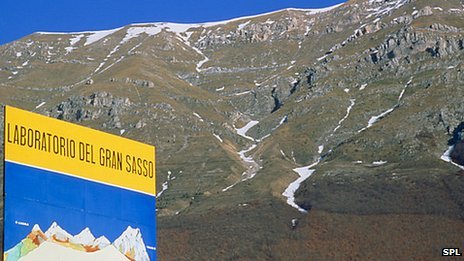 Scientists who announced that sub-atomic particles might be able to travel faster than light are to rerun their experiment in a different way.

This will address criticisms and allow the physicists to shore up their analysis as much as possible before submitting it for publication.

Dr Sergio Bertolucci said it was vital not to “fool around” given the staggering implications of the result.

So they are doing all they can to rule out more pedestrian explanations.

Neutrinos sent through the ground from Cern (the home of the Large Hadron Collider) in Geneva toward the Gran Sasso laboratory 732km away in Italy seemed to show up a tiny fraction of a second earlier than light would have.

The speed of light is widely regarded as the Universe’s ultimate velocity limit. Outlined first by James Clerk Maxwell and then by Albert Einstein in his theory of special relativity, much of modern physics relies on the idea that nothing can travel faster than light.

For many, the most comforting explanation is that some repeated “systematic error” has so far eluded the experimenters.

Since September, more than 80 scientific papers about the finding have been posted to the arXiv pre-print server. Most propose theoretical solutions for the observation; a few claim to find problems.

Dr Bertolucci, the director of research at Cern, told BBC News: “In the last few days we have started to send a different time structure of the beam to Gran Sasso.

“This will allow Opera to repeat the measurement, removing some of the possible systematics.”

The neutrinos that emerge at Gran Sasso start off as a beam of proton particles at Cern. Through a series of complex interactions, neutrino particles are generated from this beam and stream through the Earth’s crust to Italy.

Read also: A Test for Neutrinos: Put Up or Shut Up