A team of scientists at the Planetary Science Institute in Tucson, Arizona, have drawn attention to a couple of small mineral-rich depressions on Mars that, perhaps relatively recently in the red planet’s history, could have been places for life.

The troughs were discovered at Noctis Labyrintus, also known as ‘the labyrinth of the night’ – a region that is noted for its system of deep, steep-walled valleys. “We discovered these locations that show many kinds of minerals that formed by water activity,” says Catherine Weitz, lead author of a paper featured in the journal Geology and a senior scientist at the Institute. “The clays we found, called iron/magnesium [Fe/Mg]-smectites, are much younger at Noctis Labyrinthus relative to those found in the ancient rocks on Mars, which indicates a different water environment in these depressions relative to what was happening elsewhere on Mars.” 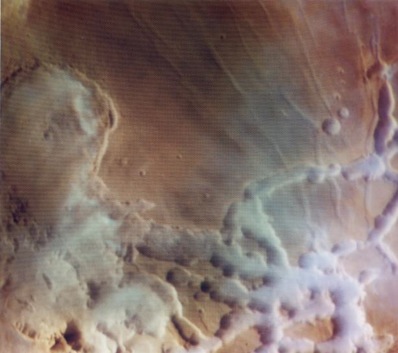 A Viking 1 image of Noctis Labyrinthus. The canyons are filled with mist from frost sublimated by the early-morning Sun. South is toward the top

The smectites that Weitz speaks of are a silica and aluminum based type of clay also found to contain iron or magnesium. This specific substance, which readily expands or contracts under the influence of water, is formed from other silicate materials which have been altered in the presence of non-acidic water.

Along with her colleagues, Weitz investigated around 300 metres of rock, vertically exposed within two 30 to 40 kilometre depressions close to the western end of the Valles Marineris canyon system. With the help of high-resolution images from the High Resolution Imaging Science Experiment (HiRISE) camera and spectral data from the Compact Reconnaissance Imaging Spectrometer for Mars (CRISM) on the Mars Reconnaissance Orbiter (MRO) spacecraft, combined with the assistance of Digital Terrain Models that enabled elevations and geometric relationships between areas to be determined, the team were able to map hydrated minerals. This in turn allowed them to understand how the water chemistry varied over time within each of the depressions, also referred to as troughs……

It is believed that each depression underwent several episodes of water partially filling low-lying regions leading to the deposition of minerals. This action caused the troughs to enlarge, experiencing collapse over time thus leading to older minerals becoming buried and separated. But these minerals do not stay hidden for long; after the deposition of new minerals, final erosion reveals them.

What caused the subsurface water to flow through the Martian ground and into the troughs? Weitz and her team believe that it might have something to do with volcanism, namely by the action of the Tharsis volcanoes located to the west on the red planet. Localised volcanism that spews ash and gases, or hydrothermal activity along with melting snow or ice could have also played their part in the farming of minerals.

“One possibility is that volcanic ash was deposited within the trough by localised eruptions, perhaps in association with the formation and enlargements of these depressions,” says Weiz. “The ash was then altered by hydrothermal solutions to form minerals under variable pH conditions.” 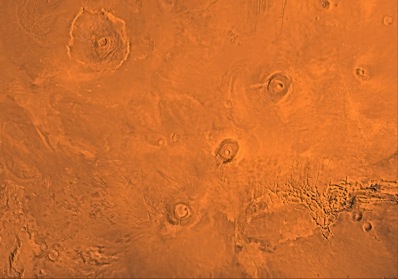 The Tharsis region of Mars, including the three volcanoes of Tharsis Montes (Arsia, Pavonis and Ascraeus Mons), as well as Olympic Mons in the upper left corner. The Tharsis volcanoes may have been responsible for the subsurface water that filled the troughs.

It was discovered that the water varied in pH levels over time, with one trough shifting from acidic to neutral, and in the other from neutral to acidic and then back to neutral. “Some of the minerals formed under acidic conditions, like the sulphates and hydrated silica/opal,” she tells Astronomy Now. “The Fe/Mg-smectite clays could only form under neutral conditions.”

While other occurrences of Fe/Mg smectites have been uncovered on Mars, they are mostly only in association with older, Noachian Age (more than 3.6 billion years ago) rocks or produced by impacts of a younger nature. “So far, the other places where the Fe/Mg-smectites have been found have been dated, either by craters or relatively using stratigraphy, as the older Noachian terrains. This is not a precise method for determining ages, however,” says Weitz. After the deposition of these smectites, it is believed that the climate on Mars altered during the Hesperian Age to favor the formation of minerals under more acidic conditions, including the salts rich in sulphur.

The sulphates and Fe/Mg-smectites that were uncovered in the Noctis Labyrinthus troughs have been found elsewhere on Mars. However, the progression of minerals over time, from sulphates to Fe/Mg-smectites, in the depressions indicated a reverse order relative to the happenings globally across the red planet’s terrain. “These clays formed from persistent water in neutral to basic conditions around 2 to 3 billion years ago, indicating these two troughs are unique and could have been a more habitable region on Mars at a time when drier conditions dominated the surface,” says co-author and CRISM team member Janice Bishop from the SETI Institute and NASA Ames Research Center.

“These troughs would be fantastic places to send a rover, but unfortunately the rugged terrain makes it unsafe both for landing and for driving,” adds Weitz.

One thought on “Possible life in the Martian trenches?”