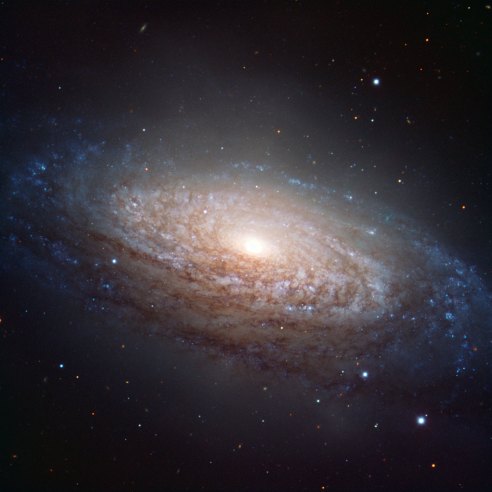 This new picture from ESO’s Very Large Telescope shows NGC 3521, a spiral galaxy located about 35 million light years away in the constellation of Leo (The Lion). Spanning about 50 000 light-years, this spectacular object has a bright and compact nucleus, surrounded by richly detailed spiral structure.

The most distinctive features of the bright galaxy NGC 3521 are its long spiral arms that are dotted with star-forming regions and interspersed with veins of dust. The arms are rather irregular and patchy, making NGC 3521 a typical example of a flocculent spiral galaxy. These galaxies have “fluffy” spiral arms that contrast with the sweeping arms of grand-design spirals such as the famous Whirlpool galaxy or M 51, discovered by Charles Messier.

NGC 3521 is bright and relatively close-by, and can easily be seen with a small telescope such as the one used by Messier to catalogue a series of hazy and comet-like objects in the 1700s. Strangely, the French astronomer seems to have missed this flocculent spiral even though he identified several other galaxies of similar brightness in the constellation of Leo.

It was only in the year that Messier published the final version of his catalogue, 1784, that another famous astronomer, William Herschel, discovered NGC 3521 early on in his more detailed surveys of the northern skies.  Through his larger, 47-cm aperture, telescope, Herschel saw a “bright center surrounded by nebulosity,” according to his observation notes.

In this new VLT picture, colourful, yet ill defined, spiral arms replace Herschel’s “nebulosity”. Older stars dominate the reddish area in the centre while young, hot blue stars permeate the arms further away from the core.

Oleg Maliy, who participated ESO’s Hidden Treasures 2010 competition [1], selected the data from the FORS1 instrument on ESO’s VLT at the Paranal Observatory in Chile that were used to create this dramatic image. Exposures taken through three different filters that passed blue light (coloured blue), yellow/green light (coloured green), and near-infrared light (coloured red) have been combined to make this picture. The total exposure times were 300 seconds per filter. Oleg’s image of NGC 3521 was a highly ranked entry in the competition, which attracted almost 100 entries.

[1] ESO’s Hidden Treasures 2010 competition gave amateur astronomers the opportunity to search through ESO’s vast archives of astronomical data, hoping to find a well-hidden gem that needed polishing by the entrants. To find out more about Hidden Treasures, visit http://www.eso.org/public/outreach/hiddentreasures/.