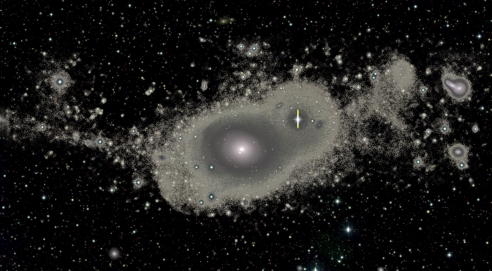 The galaxy NGC 5557 clearly exhibits extremely extended and faint tidal streams spanning more than 1.2 million light-years from left to right on this image from the MegaCam mounted on the Canada-France-Hawaii Telescope. Image by P.-A. Duc 2011 (c) CEA/CFHT

The standard model for elliptical galaxies formation is challenged by a new result uncovered by an international team of astronomers from the Atlas3D collaboration. Team members from CNRS, CEA, CFHT, and the Observatoire de Lyon published in the scientific journal Monthly Notices of the Royal Astronomical Society the first results from their study on two elliptical galaxies exhibiting features characteristic of a fairly recent merging, suggesting they are five times younger than commonly thought.

The common belief on the mass assembly history of massive elliptical galaxies based on their stellar population leads to an age between 7 and 10 billion years old. A different story is shaping up based on ultra-deep images of two galaxies observed with the MegaCam camera mounted on the Canada-France-Hawaii Telescope (CFHT, CNRC/CNRS/University of Hawaii).

Astronomers from CNRS, CEA, CFHT, and the Observatoire de Lyon, all members of the Atlas3D international collaboration, established that the formation of the two studied elliptical galaxies (NGC 680 & NGC 5557) originated from a merger of two giant spiral galaxies that took place only 1 to 3 billions years ago. Such age estimate is based on the presence of ultra faint filaments in the distant outskirts of the galaxies. These features called tidal streams in the astronomers parlance are typical residuals from a galaxy merger. They are known not to survive in this shape and brightness for more than a few billion years, hence the new age estimate of the resulting elliptical galaxies. These structures were detected for the first time thanks to a very-deep imaging technique boosting the capabilities of CFHT’s wide-field optical imager MegaCam.

The Atlas3D team conducts a systematic survey of more than one hundred nearby elliptical galaxies. If the current result based on the first two galaxies is confirmed on the larger sample, i.e. faint extended features are frequently detected, the standard model for elliptical galaxies formation should be revisited. 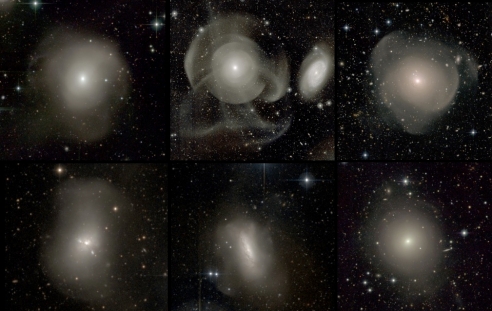 A sample of elliptical galaxies from the Atlas3D survey current collection, all showing clear signs of a recent collision. Image by P.-A. Duc 2011 (c) CEA/CFHT