The catalogue that lists the most violent neighbourhoods in the Universe has been updated. 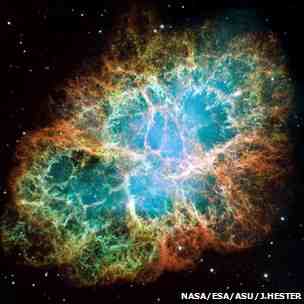 Fermi spotted that the Crab Nebula, once thought to be constant, flares violently with gamma rays

The Fermi space telescope captures gamma rays – the highest-energy light in nature, which hints at the cosmos’ most extreme conditions and processes.

Dave Thompson, a Nasa astrophysicist who co-led the catalogue’s production, told BBC News that the effort was more than just an expanded list.

It is also a snapshot from a slowly unfolding film of the Universe’s most extreme environments.

“It’s very important to understand that the gamma-ray sky is not static, it’s changing all the time,” explained Steven Ritz, deputy principal investigator for the Fermi mission’s Large-Area Telescope…..

“Our great advantage with this facility is that we’re able to see the whole sky all the time; every three hours we’ve covered the whole sky, so there are interesting differences between the first year catalogue and the second and that speaks to the variability of the sky,” he told BBC News.

The greatest proportion of the sources – 1,095 of the 1,873 – is made up of what are known as active galactic nuclei, which are thought to be supermassive black holes at the centres of galaxies.

While they are known more for drawing material in, black holes can also help generate a jet of material and light; this jet, when pointed straight at the Earth, is known as a blazar.

But the second-most common category that Fermi has spotted, comprising some 572 gamma-ray sources, is “unidentified”.

That is, researchers have compared the objects’ locations with those of other known sources of light, and found nothing that should be a gamma-ray emitter.

They are hundreds of cosmic mysteries waiting to be solved.

“My guess is that it’s not just one class of sources, but there are many sources of types we already know about that we just haven’t identified yet at other wavelengths,” Dr Ritz said.

“And quite possibly new types of sources, which is what the whole thing is all about.”

The Fermi team will continue to collect and refine their data, but the second catalogue represents the most comprehensive list that science has obtained of the Universe’s most violent neighbourhoods – yet it remains to find out exactly what is going on in them.

“Our knowledge of the gamma-ray sky is very poor, so our knowledge of how gamma-ray sources tick – what makes them, how particles behave in them – is still fairly new,” said Fermi project scientist Julie McEnery.

“It’s part of the reason that the gamma-ray astronomy field is so exciting – because it’s so fresh. We’ve been looking at the ‘optical’ sky since the Babylonians but the gamma-ray sky is definitely a 20th and 21st Century experience.”