Humans have been seeing strange things on the surface of Mars for centuries. From the 1700s up through the present day, widespread fame has been available to anyone able to produce even the slightest bit of flimsy evidence that there’s Martian life.

A perspective view showing the so-called 'Face on Mars' located in the Cydonia region. The image shows a remnant massif thought to have formed via landslides and an early form of debris apron formation. The massif is characterized by a western wall that has moved downslope as a coherent mass. The image, created with data from the Mars Express orbiter, was released Sept. 21, 2006

The most recent example was this week’s supposed revelation that a secret Mars base, inhabited either by humans or Martians, can be seen in a photo of the Red Planet’s surface taken by an orbiting spacecraft.
But scientific rigor has always stepped in to prove that these objects are not really there. In this vast and lonely universe, are Earthlings just desperate for next-door neighbors to play with? Looking back over the long history of Martian illusions (and human delusions), it certainly seems so. [7 Things that Create Great Space Hoaxes]
Land and sea
In 1784, Sir William Herschel, a famous British astronomer, wrote that dark areas on Mars were oceans and lighter areas were land. He speculated that Mars was inhabited by intelligent beings who “probably enjoy a situation similar to our own.” Herschel’s theory prevailed for a century, with other astronomers claiming that vegetation could even be observed in the lighter-colored regions taken to be land. Fortunately for Herschel, his other contributions to astronomy — which earned him the honor of being the namesake of two powerful observatories — were great enough to keep his theories on Martians near the bottom of his biography.
Canali vs. canals
During Mars’ close approach to Earth in 1877, the Italian astronomer Giovanni Schiaparelli peered through his telescope and observed grooves or channels on the Red Planet’s surface. The Italian word he used for them, “canali,” was translated to “canals” in English, leading many in the English-speaking world to conclude that Mars had intelligent life that had built a system of waterways.
That misconception was popularized by an astronomer named Percival Lowell, who in 1895 presented drawings of the canals in a book, titled “Mars,” and argued his full theory in a second book, “Mars as the Abode of Life,” in 1908. The inaccuracy was further fueled, historians say, by excitement over the construction of the Suez Canal, an engineering marvel of the era completed in 1869.
The theory was debunked in the early twentieth century, when it was demonstrated that the “canals” were merely optical illusions: when viewed through poor-quality telescopes, pointlike features, such as Mars’ mountains and craters, appear to be joined together by straight lines. Later, spectroscopic analysis of the light coming from Mars showed that there was no water on its surface. [Would Humans Born On Mars Grow Taller than Earthlings?]

ET radio
In 1921, Guglielmo Marconi, inventor of the first radio telegraph system, claimed to hear signals that he thought might be Martian. The next year and again in 1924, at times when Mars swung relatively close to Earth, the U.S. government asked all radio stations to go silent so that they could listen out for any Martian transmissions coming our way.
But ET radio was silent.
The face
It all started back in 1976, when NASA released an image of an interesting mountain on Mars, taken by the Viking 1 spacecraft, complete with a caption that described the formation as appearing to have eyes and nostrils. More than thirty years later, the “Face on Mars” still inspires myths and conspiracy theories, with many people believing it to be an artificial structure built by an ancient Martian civilization.
From a bird’s-eye view, shadows on the mountain really do make it look like a face. From other angles, however — angles seen in photos taken by the Mars Express Orbiter, among other spacecraft — the mountain is clearly just that, and doesn’t look much like a face at all.
“Pareidolia” is the scientific term for seeing faces (or other significant objects) where they aren’t. Face pareidolia happens, scientists say, as a byproduct of our heightened sensitivity to the details of human faces. Takeo Watanabe of the Boston University Visual Sciences Laboratory put it this way: “We’ve over-learned human faces so we see them where they aren’t.” [Face On Mars: Why People See What’s Not There]
Martian person 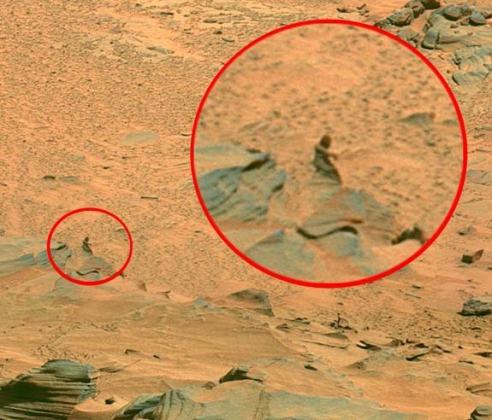 NASA'S Mars Exploration Rover Spirit captured this westward view from atop a low plateau where Spirit spent the closing months of 2007.

In a photo snapped by the Mars rover Spirit in 2007, there appears to be a human being wearing a robe and kneeling in prayer. It is, of course, a rock, and merely morphs into human form in our brains because of pareidolia, as explained above.
Bio Station Alpha
This week, yet another smidgen of evidence arose that, on first examination, seemed to support the notion that there’s life on Mars. In a viral Youtube video, a self-described “armchair astronaut” claimed to have identified a human (or alien) base on Mars, which he dubbed Bio Station Alpha. He found a somewhat mysterious linear structure that appears to be on the Red Planet’s surface as seen in Google Mars, a new map program created from compiled satellite images of the planet.
Astronomers immediately identified the structure — in actuality just a white, pixelated streak — as an artifact deposited by a cosmic ray in the image sensor of the camera that snapped the photo. “With space images that are taken outside our magnetosphere, such as those taken by orbiting telescopes, it’s very common to see these cosmic ray hits,” said Alfred McEwen, a planetary geologist at the Lunar and Planetary Lab at the University of Arizona and the director of the Planetary Imaging Research Laboratory.
Cosmic rays are energetic particles emitted by the sun. They deposit electric charge in camera pixels as they penetrate them, momentarily saturating them and creating a white streak in any photo snapped at the time.
When the raw image file was converted to a JPEG for use in Google Mars, McEwen said compression probably caused the cosmic ray artifact to become more rectangular and “Bio Station”-like. This was subsequently proven to be the case, when the original source photo that Google used was identified. It contained an obvious cosmic ray artifact, which, when processed, turned into the structure that the “armchair astronaut” mistook for a Mars base.
http://www.space.com/11907-mars-history-martian-illusions-human-delusions.html